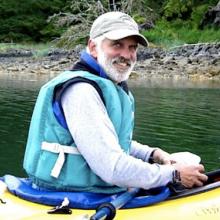 Kurt Hoelting grew up in the Pacific Northwest, spending his youth in Seattle, Washington, and Vancouver, British Columbia. He is a graduate of the University of Washington and Harvard Divinity School.

Kurt has worked summers as a commercial fisherman and wilderness guide in Alaska for several decades. In 1994 he founded Inside Passages, a sea kayaking guide business that combines his love for wilderness exploration, environmental activism, and contemplative practice. He has guided dozens of kayaking expeditions in the Southeast Alaskan wilderness for leaders from diverse professions, geared to building more ecologically literate and personally resilient leadership practices in an era of deep environmental challenge.

In 2008 Kurt decided to take on the gap between his convictions about climate change and his own growing carbon footprint. He embarked on a yearlong experiment to rediscover the heart of his own home by the shores of Puget Sound, trading in his car and jet travel for a kayak, a bicycle, and his own two feet. His 2010 book The Circumference of Home: One Man’s Yearlong Quest for a Radically Local Life chronicles the experience, and was a finalist for the 2011 Washington State Book Award. Hoelting writes: “This much is clear to me. If I can’t change my own life in response to the greatest challenge now facing our human family, who can? And if I won’t make the effort to try, why should anyone else? So I’ve decided to start at home, and begin with myself. The question is no longer whether I must respond. The question is whether I can turn my response into an adventure.”

Browse shows that Kurt has contributed to.