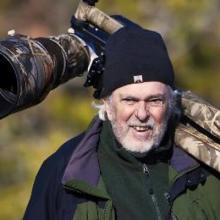 Lloyd Spitalnik might be the only BirdNote photo contributor who is also a movie star, having appeared in The Central Park Effect as himself.
Lloyd lives and takes photographs in New York. His photos have appeared in The New York Times, Audubon, and ABA's Birding magazine, among others. You'll find him at the helm of the Jamaica Bay Shorebird Festival in August.

Browse shows that Lloyd has contributed to.