BirdNote team member Adam Sedgley and his wife had the opportunity to relocate to Paris for nine months. Here he tells of his birding adventures in the Netherlands in early March 2013.

Yeah, it’s cliché, and I am certainly not the first birdwatcher to use, or perhaps abuse, this phrase. But when one travels to the Netherlands in winter to look for geese—totaling nine commonly occurring species—“Wild Goose Chase” suddenly seems awfully appropriate. 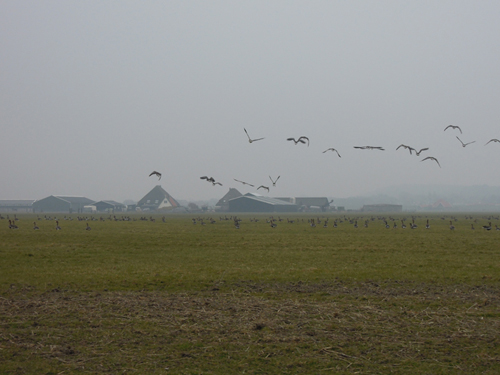 I’d learned of the bounty of Branta when my wife and I relocated to Paris in 2012 and I began to research what European birds were found where, and when. The Netherlands in winter quickly fell on my radar. Several goose species that show up rarely in North America, including Pink-footed, Barnacle, Graylag (or "Greylag" in Britain), and Tundra Bean, occur regularly in this low-lying country, sometimes in flocks of tens of thousands. Greater White-fronted Geese are found on both continents, but their diminutive cousin, the cleverly named Lesser White-fronted, is much more scarce and found few other places on earth. Brant (or "Brent") occur on both continents as well, but the Dutch population is the bernicla subspecies that breeds in Russia. The widely distributed Canada Goose and Egyptian Goose, both established species from exotic origins, round out the nine commonly occurring species. Throw in a rare species such as Red-breasted, Taiga Bean, Ross’s, or Snow, and you have the potential of a double-digit goose count in a single day.

Of course, you have to care about geese. And Steven, a Dutch gentleman I had met through BirdingPal, was a bit surprised about my obsession. Nevertheless, he was excited to help this American birdwatcher find some new birds, and we scheduled a full day of goose-chasing on March 8 when I would be in Amsterdam.

For several weeks prior to this trip, I routinely checked the Dutch reporting website, www.waarneming.nl (Dutch version of eBird.org), for updates on rarities. Rare birds in the Netherlands have most likely strayed from North America, Africa, or Siberia. And if they do stray, you can almost guarantee they’ll be found, and then subsequently seen by hundreds of Dutch birders within hours. Steven estimated that there are 400-500 expert birders in the Netherlands, i.e., people who can readily identify any bird that occurs in Europe—no matter the age or sex—by sight or sound. Another 10,000-15,000 people care enough about birding to contribute data to waarneming.nl (waarneming means “sighting”). Considering that the Netherlands is the same size as Greater Los Angeles, you can safely assume that every bird that penetrates Dutch borders will be scrutinized by this cadre of birdwatchers, and likely on a daily basis.

A couple of Red-breasted Geese, flamboyantly colored diminutive geese that breed in northern Russia and winter near Turkey, were seen in flocks of Barnacle Goose. This is a bird that is frequently kept in captive waterfowl collections in North America, and one I had wanted to see since I was a child. 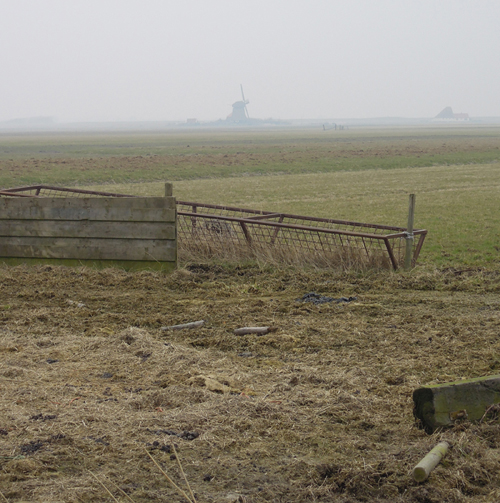 But then something awful occurred during the week leading up to my trip: the weather began to improve. Bright sun and clear skies clearly signaled that winter was coming to a close. There was jubilance across Paris as warm temps improved spirits, but I was nervous. I feared that the geese may be getting itchy to start their northward migration.

A couple days before my trip, an email from Steven confirmed my fears: the Pink-footed Geese were already gone and the Tundra Bean Geese were beginning to follow suit. Crap. “The Lesser White-fronts are still around,” Steven wrote, sensing that my mood would need to be lightened. As scarce as they are—and declining—it would indeed be a highlight of my trip. “At the very least, we can just go birding.”

At 7:00AM on the 8th, he pulled up in front of our hotel in Amsterdam. I shook his hand, gave him a coffee, and we were on the road, heading north. For 20 minutes, we drove around the nearby town of Heiloo (“HIGH-low”) to look for a second-winter Iceland Gull that was spending the winter in a small canal in the middle of a suburban cul-de-sac. Unfortunately, the man who had been feeding the gulls hadn’t yet put any bread out and only a handful of Black-headed and Herring Gulls were frequenting the neighborhood. I hadn't seen a single goose yet, so I was getting even more anxious.

Our next stop was farther north, so on to Camperduin ("CAN-per-dine") to drive the narrow roads through agricultural fields interspersed with small homesteads and iconic windmills. Within minutes, we rolled past a small flock of Greylag Geese (#1) that included a pair of Greater White-fronted Geese (#2). We continued a couple hundred meters and found a much larger flock of Greater White-fronts. After scanning with binoculars, we realized that the flock was intermixed with some smaller geese. We quietly got out of the car and set up our spotting scopes to find the shorter bills, steeper foreheads, and distinct eye-rings of Lesser White-fronted Geese (#3). In the immediate area, we tallied 38 of this vulnerable species, which has a global population of about 30,000. I was lucky -- they had waited for me, or at least had avoided taking off in the thick clouds that hung low in the sky. While numbering only a few hundred birds, this flock also produced a small number of Barnacle Geese (#4), a few Brant (#5), and a distant pair of Egyptian Geese (#6). Meadow Pipits were doing their flight displays despite the subzero wind, which drove Steven and me back into the car. 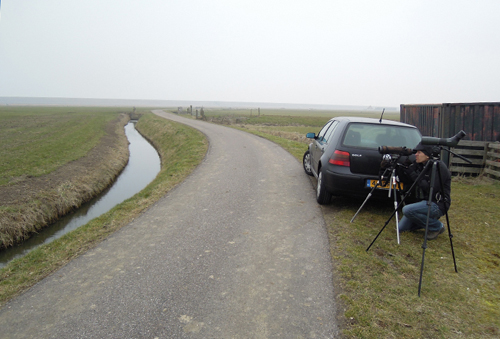 We continued to explore this expanse of flat agricultural fields, where we found several large flocks of Barnacle Geese, a favorite hiding place for the Red-breasted Goose. We scanned each flock for the black back and distinctively colored head and neck of this rare visitor, but we came up empty. Out of 100,000 Barnacle Geese, one or maybe two Red-breasted Geese will be found, odds certainly not in our favor.

“Have you seen ‘Pied Wagtail’?” Steven asked me, referring to a black-backed form of the normally gray-backed White Wagtail, which breeds in Great Britain but migrates through mainland Europe. Some authorities consider it a separate species.

Within minutes, we were driving a small country road next to a wetland in Abbestede (“A-buh-stay-duh”). As if on cue, three wagtails fell from the sky, including two adults, one with a gray back, the other black. Check.

Back on the road, I confided that I had never seen a Common Eider, an Arctic seaduck with white and diffused pastel markings and a long-sloping forehead. “Easy. We’ll be driving by a beach where a couple were recently reported,” Steve responded, checking his phone. We were soon pulling in to the parking lot of Falga (“Fall-Hah”) surrounded by coastal conifer trees. We walked over sweeping coastal dunes for ten minutes before arriving at the beachside restaurant and expansive sandy beaches. The boarded-up windows and sand drifts hinted that this was the off-season. Two beautiful male Common Eiders were easily found just beyond the surf, providing easy scope studies of a bird I’d seen only in pictures. They are even more colorful in person. Steven laughed in disbelief every time I excitedly pointed out every one that flew by. The rough surf also hosted several Razorbills – a relative of puffins that I’d never seen before – in both breeding and winter plumages, as well as Slavonian Grebe and Red-throated Diver (Horned Grebe and Red-throated Loon to North American birders), both of which were additions to my European list. 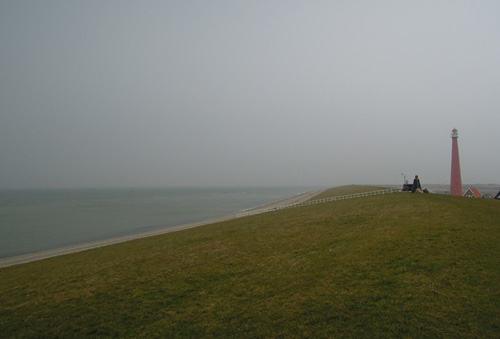 Our next stop was along a fortified shoreline a little farther north on Den Helder Boulevard, to look for Purple Sandpipers. A handful of Ruddy Turnstones, Red Knots, and Dunlin greeted us, but the real action was off shore, where spring migration was just ramping up: flocks of European Wigeons, Northern Pintails, Northern Shovelers, Red-throated Loons, and various shorebirds, all flying north. I soon picked out my lifer Common Scoters (a species recently split from the Black Scoter in North America) and several Northern Gannets, a relative of boobies and another addition to my European list.

It was a short drive to Hippolytushoef (“HI-poh-li-tus-hoof”) to case the agricultural fields for a large wintering flock of Brant. We quickly found them, and the large roadside flock of sheep near them quickly found us. That cacophonous greeting is not one I’ll soon forget.

Seeing such a large flock of Brant – we counted over a thousand – was a new experience for me. The fact that they were foraging on grass was also new. Seattle birders are not used to seeing our local "Black" Brant far from beaches in Puget Sound, where they are especially fond of eelgrass, a marine plant. Steven and I sifted through the foraging flock of Brant – the “Dark-bellied” bernicla subspecies that breeds in Russia – looking for the “Pale-bellies” of the hrota subspecies from Greenland. The first two we saw were together, and we soon picked out another six before we put the scopes back in the car.

My goose count stood at six, respectable in North America but lower than the total I’d expected that day. We needed to continue our search. Then, Steve saw a distant, but promising, flock of Greylags. We slowly approached and Seve found the dark chocolate heads of #7, Tundra Bean Goose. I fumbled to get a couple of photos of this cooperative lifer before we were on the highway south to Amsterdam.

Surely my number would still climb once we found a Canada Goose.

“What?” Steven replied, incredulous as to why I wanted to take valuable time to find a nuisance species. Although not native to Europe, the Canada Goose is established in the Netherlands and thus “countable” in birder parlance.

Seconds later, we zoomed past another flock of geese feeding on the side of the highway. Brown bodies, black necks, white cheek-patch: Canada Geese, #8. And we didn’t even need to slow down.

We chased the waning daylight to Waterland (“VA-ter-lund”), another vast agricultural area, just east of Amsterdam. We stopped to scan the first flock of Barnacle Geese we found, numbering 20,000, hoping to find one Red-breasted. A resident stopped to talk to us, explaining that the government compensates farmers for any crop damage inflicted by the wintering hordes of roaming lawn-mowers. After scanning five different flocks, I was feeling as if the tally would remain at eight. As twilight swallowed the day, we perched up on a dyke above a small, vegetated bay, to scan the last flock of Barnacle Geese. Slowly, this evening roost of vociferous waterfowl continued to grow as Vees of geese returned from the fields behind us. Within 30 minutes, the chatter grew to a roar, as the flock swelled to 50,000 birds.

Finally, the light became too flat for me to tell the difference between white and red, so I had to give up my quest for a Red-breasted Goose. Then, Steven pointed out the elongated profiles and slender bills of two Caspian Gulls. Another lifer: a nice consolation.

You always have to save something for next time.

This blog entry was originally posted on March 13, 2013 at www.flockingsomewhere.com. 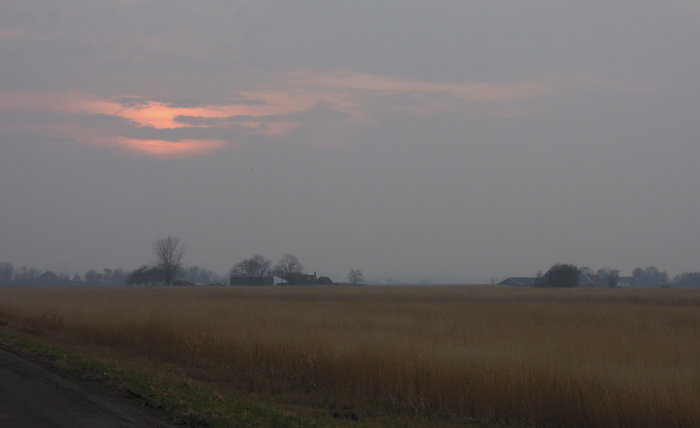 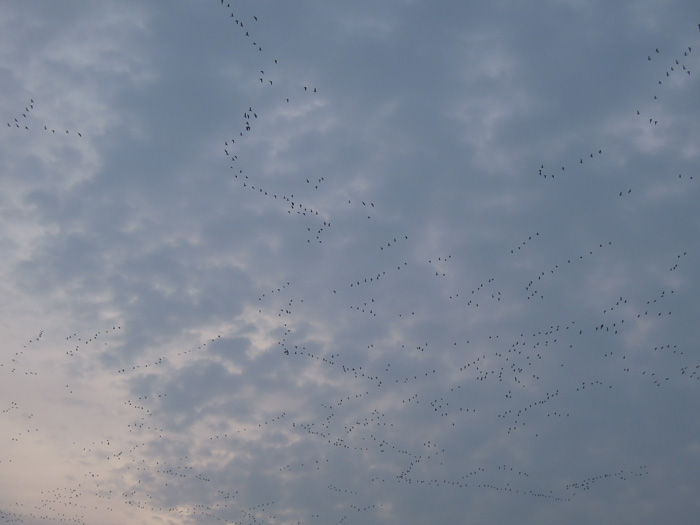