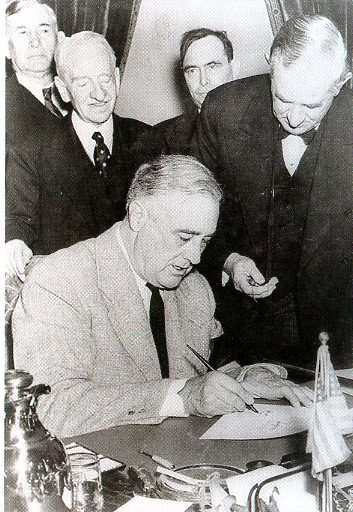 It was 1934. And it was among the worst of times for the United States. Franklin Delano Roosevelt’s New Deal was in its infancy. The unemployment rate hovered around twenty percent. The average annual wage was about $1,300. A pound of bacon and a pound of sugar cost about thirty cents. It was hardly the time for most folks to think about paying more for anything, and pennies were hard to come by for many. But somehow, in the midst of so much going wrong, something happened that was right: The Migratory Bird Hunting Stamp Act passed. 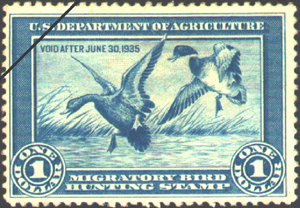 That first "Duck Stamp," as it became known, featured the Mallard, the best known of all North American waterfowl. And it cost but one dollar. Drawn by J.N. "Ding" Darling himself and humbly produced as a blue figure on a white background, it set the stage for one of the nation’s greatest conservation success stories.

It was 1934. Imagine someone peeling a dollar out of his pocket to pay for a stamp, when a shirt cost less than that. Imagine the courage it took for politicians to back an appropriation dedicated almost solely to habitat and wildlife conservation. Imagine waterfowl and wetlands being given a chance to prosper when many people were struggling to find work. This was during the worst of times.

The Duck Stamp itself has come a long way, with highly skilled artists vying annually for the honor of having their waterfowl portrait represent a tremendous conservation success story. Highly realistic and detailed portraits of waterfowl and habitats are a far cry from Ding Darling's duck, created in just two hours. But the mission has not changed. Conserve wetlands and wildlife.

Today, eighty years later, and what do we have to show for courageous action in the worst of times? That eight-decade mission has netted $900,000,000; 5.5 million acres of wetland, riparian, and grassland habitat has been saved and/or created; and hundreds of species of waterfowl and other wildlife species have been given a chance to flit, fly, swim, slither, creep, and crawl. It’s a story worth telling. Much of our esteemed National Wildlife Refuge System would not exist without it.

As dedicated conservationist-hunters have stepped forward to make much of this possible, there are things we can do – in these times – to make things still better.

It’s 2014. With what some call the “Great Recession” behind us, the median annual salary of a US citizen in 2013 was a little over $50,000 a year. Yes, the cost of living has increased greatly, but then our understanding of the importance of protecting nature has, too. We need to sell more stamps, raise more money, set aside more land.

With hunter numbers dwindling, others need to step forward to help carry the load. Some may be at odds with those who would shoot a duck. But for every duck killed by ethical hunters, legions of others are given a chance to survive – and thrive – on national wildlife refuges and other lands, thanks to the support of Duck Stamp sales. And species other than waterfowl benefit. There are a multitude of shorebirds, long-legged waders, raptors, and songbirds that would otherwise be out of luck without the investment of stamp funds. Non-feathered creatures benefit, too.

As the nation’s demographic darkens in color, it will become critical to diversify the stakeholders participating in the conservation conversation. Folks of many hues value the wildlife and habitats the Duck Stamp pays for. We should make sure they have the information and inspiration to keep refuges accessible for all. Birders and other folks inclined toward conservation could bolster sagging sales and support.

It is now up to us in these times to make a bigger difference. After 80 years, it’s time to be courageous again.

As Dickens closes A Tale of Two Cities, Sydney Carton, one of the heroes, is about to meet his end under the guillotine. In his final moments, he philosophizes that, “It is a far, far better thing that I do, than I have ever done…” It is death certain for Carton, but in the moment, he finds some solace in sacrifice for some greater future good beyond his own being. The Duck Stamp Act is indeed a matter of life and death.

Read Drew Lanham's blog about the history of the Duck Stamp.

Jennifer Miller won the contest for the 2015-2016 duck stamp for her Ruddy Ducks. Learn more.

More about the stamp's history & mission at Ducks Unlimited