The Federal Duck Stamp – An 80-Year-Old Institution Born in the Worst of Times to Make Things Better!

As Charles Dickens’ words fall to me as a high school student back in the early 1980s, I was entranced with the idea of the how a person’s identity could turn the tide of history.

Although a less than desirable chore “back in the day” for me, Mr. Dickens’ work eventually became of my favorite works. Fast-forward to now, and the words were the first to enter my brain as I began to contemplate what the Duck Stamp has meant for bird conservation in the US over the past eighty years.

The 1920s had indeed been “the best of times” for some. For many coming of age in the “Roaring Twenties,” there was the high life to dream of … flappers and gangsters. Opulent lifestyles of the rich, famous, and sometimes nefarious had largely defined a decade where urban living in metropolises like New York City and Chicago had become the model for Americans – and much of the rest of the world – to aspire to. It was indeed an age of folly, as Americans bet everything against never-ending good times, and natural resources that no one seemed to notice were being abused.

But the worst of times were on the horizon. As the US grew and the demand for land and food along with it, unsustainable agricultural practices and unbridled development wrought havoc. Sodbusters were stripping Midwestern prairies of their soil, and swamp-busters were ditching and draining every wetland they could get a steam shovel in to. As “progress” turned the soil and drained the swamps, populations of migratory waterfowl suffered mightily. With many species still recovering from the wanton history of market hunting and unregulated harvest, the destruction of habitat seemed a final straw that would spell the end for quickly disappearing rafts of “Cans” (Canvasbacks), wheeling flocks of “Sprigs” (Northern Pintails), and almost every other duck species.

And then came the Great Depression. It was, as Dickens lamented, a time of darkness and despair. As markets fell and the once indefatigable American spirit, too, it seemed as if wildlife conservation would fall the same way. In Dickens' novel, there’s a theme of rebirth that runs throughout. As the heroes in A Tale of Two Cities battle internally and societally for their identities, American conservation in the 1920s was trying to re-find its footing beyond the heroism of icons such as Teddy Roosevelt, George Bird Grinnell, John Muir, and Gifford Pinchot. That early momentum seemed lost in the egocentric enthusiasm of the era. Once the depression took that away, few seemed bent on anything other than economic recovery. 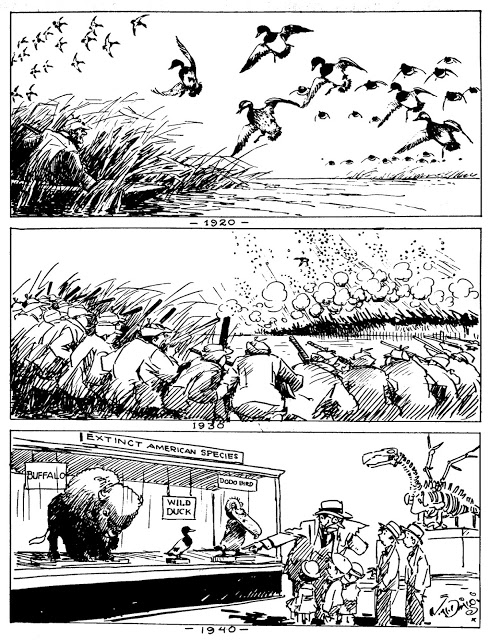 But along came President Franklin D. Roosevelt, and he seemed properly poised – by name and philosophical bent – to think about recovery in a broader sense. America was more than simply a land of cities and growing sprawl that needed a hand up. It was a land still defined by its rural population and natural resources, and in that recognition, he and other visionaries set about recovering the human spirit and wildlife habitats with almost equal zeal.

It was clear to many wildlife and waterfowl enthusiasts that something had to be done, and soon. Numbers of many species were at all-time lows, and for some it seemed that extinction was inevitable. With the economic woes that had gripped the country in 1928, it must have seemed hopeless to some that anything of consequence could happen in the midst of so much national human suffering. But dedicated spirits kept at it throughout the 1920s and into the early '30s. Still, in 1934, after years of political wrangling in Washington and among many of the then-fledgling conservation groups, the talk of how best to stave off the precipitous declines of waterfowl and the wanton destruction of wetland habitat had led to little beyond ideas that something needed to be done.

My good friend and conservation ornithologist, Paul Baicich, in an address to the North American Wildlife and Natural Resource Conference wrote that “ …it took over a dozen years to create the federal stamp, starting at least back to 1921 with two failed congressional efforts. People and organizations of good will were fighting each other over the best ways to save wetlands and waterfowl.”

According to Baicich, “Some wanted a penny a shell to go to wetland conservation; some wanted a dollar a year; some were convinced that the resulting 'shooting grounds' might threaten the remaining waterfowl. The predecessors of many well known wildlife conservation organizations had conflicting views. Over a dozen years, opportunities were lost, habitat drained and destroyed, (along with the perfect storm of a protracted drought) and a set-up was created for the impending Dust Bowl.” It was indeed the worst of times for wildfowl conservation in the United States.

During those years – long before the advent of social media and even before radio was reaching the masses – newsprint was still a highly effective medium. Ding Darling’s famous cartoons depicting the sad fate of a Mallard alongside other doomed species or a marsh crowded with hunters, blasting away at a single duck, vividly displayed where waterfowl was heading.

His pictures were worth more than a thousand words, and eventually the hearts and minds of those who hadn't been able to come together began to coalesce around a single theme of conservation. In the early 1930s, agreements and compromises were made, and the bill was finally passed in March and signed on March 16, 1934. The very first stamp was – appropriately – the creation of Ding Darling. 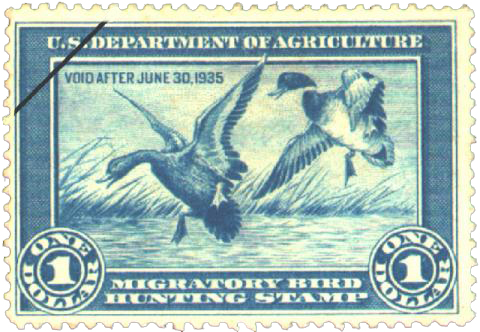 The Migratory Bird Hunting and Conservation Stamp, as it became known in 1976, turns eighty on March 16, 2014. We don’t expect much from most octogenarians, but the Duck Stamp still works hard toward the mission that so many worked so hard to have it do. Perhaps we’re in Dickens’ “spring of hope." It’s time to make sure the next 80 years of the Duck Stamp are even more powerful. By investing in its success, we’ll perhaps keep the worst of times behind us and the best – better times – ahead.

Learn where to buy a Duck Stamp.

Check out the gallery of stamp images since the inception.

The Duck Stamp was a long time in the making - Read more!