Could not retrieve the oEmbed resource.

Birds colliding with glass is a real problem, especially during migration. Many cities have initiated Lights Out! programs, which helps. And there are things that homeowners can do, too. BirdNote's Chris Peterson interviewed Christine Sheppard of the American Bird Conservancy about the problem.

SHEPPARD:      The problem is that hundreds of millions of birds, as many as a billion birds, just in the US, are being killed every year when they collide with glass, usually glass windows.

PETERSON:    And why do birds collide with glass?

SHEPPARD:    Birds don’t see glass. And as I’ve started working on this problem, I’ve realized that people don’t see glass either. But people understand context – they understand window frames, they understand right angles, whereas birds see reflections literally and think that they can fly straight through transparent glass because they just plain ol’ don’t know it’s there.

SHEPPARD:    There are really two issues: One is that birds take reflections very literally.  The other is that there are many situations where birds see plants or water, or some place they want to go, through a piece of glass and don’t realize that the glass is going to stop them.  In general, birds fly full speed into glass. People are injured every year from colliding with glass doors, but they don’t tend to be as fatally injured as birds are because they aren’t going as fast. But sometimes people actually run through a glass door and are severely injured as are birds.

PETERSON:    Christine, tell us a little about Powdermill Nature Reserve where you do the work.

SHEPPARD:    Powdermill Nature Reserve is part of the Carnegie Museum. It’s about an hour outside of Pittsburgh, in a little town called Rector, Pennsylvania. And on the reserve, they have a bird banding station that has been operating for over 50 years. Birds that are netted for banding are weighed and measured, and then some of them are tested in our tunnel to find out what kinds of materials will make birds avoid glass. 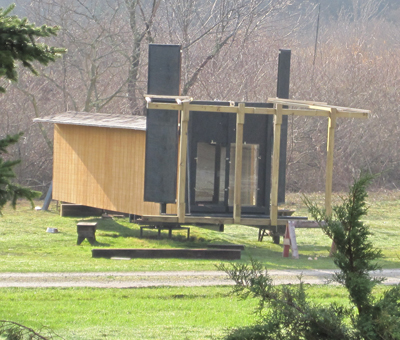 SHEPPARD:    It’s about a 30-foot plywood tunnel. The birds are put in at one end. It’s dark inside, and at the other end of the tunnel, they see two pieces of glass side by side, and on one side or the other is something that we’re testing – a piece of glass with a pattern. There’s a mist net that keeps the birds from being injured. They fly down the tunnel. When they try to fly towards the plain glass, which they can’t see, that’s scored as "avoiding" the patterned glass. So we can get an objective measure of how much a deterrent a particular pattern or type of glass is.

PETERSON:    What are you discovering in terms of what makes a better deterrent?

SHEPPARD:    We’re discovering that contrast is really important and that you can deter most collisions without having to cover more than about 7% of your windows, so people who have objected to obscuring their windows, because they want to see out, can sort of have their cake and eat it, too, at this point.

PETERSON:    Is there any theme to that pattern?

SHEPPARD:    This all boils down to spacing. Consistently, we find that the little birds we’re testing, the warblers and other passerines that are the most common victims of bird collisions, will not fly through a horizontal slot that is two inches or smaller, and they won’t fly through a vertical slot that’s four inches or smaller.
So using these guidelines, it’s possible to create lots of different patterns. The lines don’t have to be straight — they can be curved. They don’t have to be vertical or horizontal. There are different line widths and colors. The key is that – if you watch birds fly into trees, you know that they fly right into small dark spaces – so when they see a large space on a window, they don’t consider there’s any barrier. But if they see lines that are providing the spacing, they’ll fly around it instead of trying to fly through it.

Here's how to apply ABC BirdTape!

Learn more about why birds collide with buildingsLearn about bird-friendly building design from ABC (a PDF)May 2014 - The New York Times Has More!