We recently ran a show about collective nouns for groups of birds, A Murder, A Party, A Stare, Or a Siege. At the end, we asked what a group of BirdNote listeners might be called. We asked -- and you answered! Here are some of the suggestions.

LisaP and JoeMcA had the same idea. They told us a group of Bird Note listeners would be called a "pledge." (OK, so it was pledge week on a lot of local stations!)

ValerieC uses a little double-entendre, when she offers “PUPILS!” 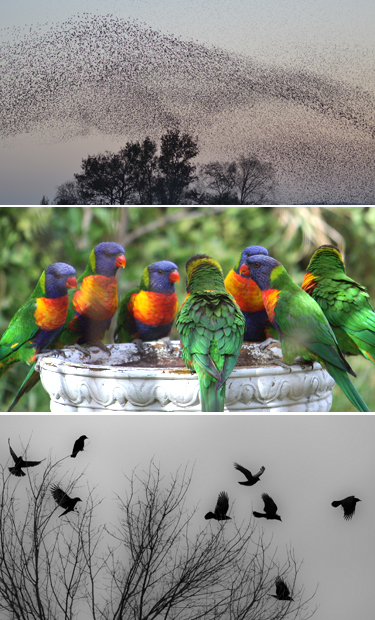 * DouglasF noted: Birders flock together with a lot of distinct calls. "Didja see that?" "Was thatta___?" Onyer life list?" I'd call us a Gabble. It has that silly flavor of flocks rushing out to see a "rare" or "exotic," like a flock of domestic turkeys spooked by a shadow. He also offers: I think a "caucus of crows" works, specially in the fall and winter, when they gather to discuss their year and plan for the next.

* DanaD believes that a group of BirdNote listeners ought to be called a "polymathy," which, she said, "... means the discourse on the encyclopaedic knowledge of a particular subject." (And then she smiled.)

In that same vein, KLW offers “disambiguation (a medical term for ear).”

* SharonS suggests: A bevy of bird watchers (in keeping with the alliteration tradition)

* AntonyX’s idea? "A Concoction of Listeners"

* GailS offers a "celebration" of birders.

* IleneAS must be a birder herself. She nominates a "confusion" of birders!

* GaryJ has a good one: a rhapsody.

* JaneF said, a hoard of birders seems to fit.

* JanelleD brings a smile: How about a "wonderment" of bird watchers.

* MikeD: I would call the large group of listeners who hear BirdNote a "Fascination of listeners," as that is the word that frequently comes to mind while I listen. (We like that a lot!)

And we totally have to agree with MaryAK, who said, “Who knew birders were such a witty group!?”

AlasdairM, a native of the UK, and a couple of other fans in the US tell us that the collective noun for a group of owls -- rather than a stare --

There are often several names for certain groups of birds. The British term for a group of rooks is also "parliament," which seems to work, too. A group of vultures in the air constitutes a "kettle," but on the ground, a "wake." These collective nouns are meant to be fun, as well as descriptive, for sure!

GingerH told us one of her favorite collective nouns is a charm of goldfinches.

And from far afield, RachelA says: In Australia we have gangs of cockatoos and a mob of kangaroos.

Oops, we missed one!

Full disclosure: We totally missed one of the collective nouns for crows. PeterP reminds us: Actually, if it's below the minimum number of crows for a murder, it is called an attempted murder.

Thanks, Everyone! We had fun and hope you did, too.

BarbD says a group of BirdNote listeners is a heard. Good one, Barb!