The Story Behind Rules for the Black Birdwatcher
A Q&A with Drew Lanham, by Jenn Dean

When Clemson professor and wildlife biologist, Dr. J. Drew Lanham, agreed to do a video for BirdNote, we had no idea of the reach the story would have. Based on a column that originally appeared in Orion Magazine, “Rules for the Black Birdwatcher” sparked a conversation that continues a year and a half later. BirdNote volunteer and writer, Jenn Dean, met up with Drew recently and asked him a few questions about the story behind the video. 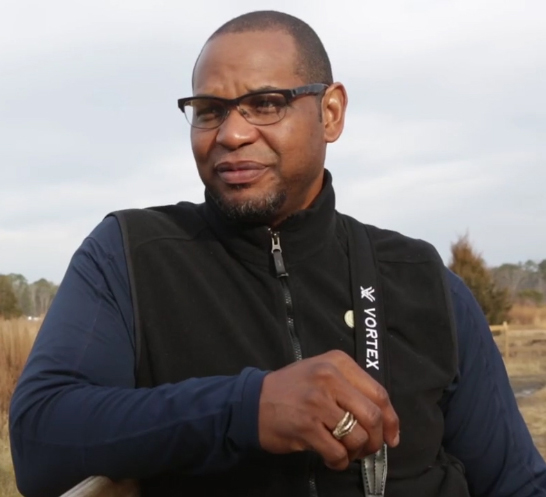 Q: Please tell us about the impetus behind Rules for the Black Birdwatcher.

A: The impetus was a piece I originally wrote for Orion Magazine. It’s the life I live. Race expands into areas a lot of folks don’t think about. We do range-mapping exercises for birds; this was an exercise in social range-mapping for black Americans. You have to look over your shoulder and think twice about whether you’re safe, even during fun activities. It’s satire: I want you to laugh, then I want you to think about why you laughed. Humor helps us let our guard down so we can have a conversation.

Q: Who was the other black birder in the film? Did you invite him to participate or was meeting him just a happy accident?

A: Everyone thinks that was scripted, but it was amazing serendipity. Another black man shows up while we’re talking about how few black birders exist. We were filming near the Assateague Island National Seashore, and this big white truck rolls up. It was James Wright, and he was out looking for Snowy Owls. The chances of another black man showing up at the exact moment we were filming a section on being profiled and having your ID ready if you’re going to be a black birder — that was one in a million. I wish I played the lotto that day.

Q: In the video, you say we have to make nature study in general more interesting to people of color. What can we do?

A: The first step is listening and giving space for people to voice opinions. Black folks and other people of color have ties to and opinions about the natural world. Second, not presuming they hold the same values you hold. Climate change isn’t just about polar bears drowning — it’s also about days when the air is so bad the news reports tell you to stay indoors for the next week.  We know that poor communities and communities of color are often downstream from pollutants.

Back in the 1960s, when the environmental movement and civil rights movement were kicking in, the two never really connected, yet environmental justice is justice. It all depends on a healthy natural world. If you want to see more Aplomado Falcons in the future, you have to think about the people who live on the border of Mexico. Because how we treat people is how we treat nature.

Q: As part of your work as a Distinguished Professor of Wildlife Ecology at Clemson University, you’re doing research on the African American land ethic. What do you hope to accomplish?

A: I’m interested in understanding how my people — black landowners — think about land and birds and nature. To listen to their stories of connection to the land. What does the land mean to them? Then we can let those stories flow outward, and other people can connect with their experiences. A momentum of empathy builds, and hopefully it builds enough that it blows apart the dam of perception that black people don’t care about nature.

Q: Your forthcoming book, The Home Place, is subtitled Memoirs of a Colored Man’s Love Affair with Nature. Do you hope that it will inspire other diverse kids to follow in your footsteps?

A: Ultimately, I hope they understand that forging your own path is important. My path was set early on, but I experienced detours. If you love doing something, be more courageous than I was and do it. Follow your heart. If passion precedes you, success follows you. Be who you are. It’s about heart and love. That’s what it boils down to.

Q: You believe conservation should blend head and heart, rigorous science and evocative art. What makes both necessary?

A: So often the data comes across as dry and unfeeling. There can be words that are poetically written that depict an observation, and that’s no less data. How we present it is critical. If you care deeply about something, you’re going to love it. You’ll act to save it.

Learn more about Drew Lanham and the making of the video, Rules for the Black BirdWatcher.

Funding for the video comes from the Chris Peterson Fund for Creative Storytelling.