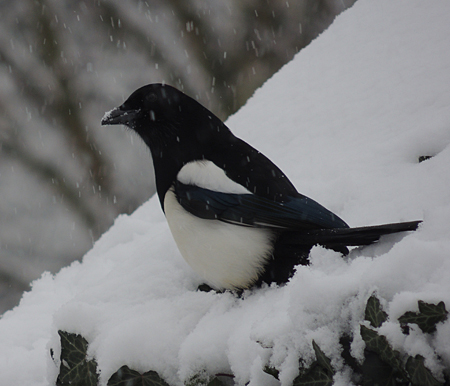 Wim Vader, a birder of many years, writes about the birds he's seen in Tromsø, Norway, in 2017:

4 January — Here at 70°N, we have had almost too much weather. December was warmer than usual, with double the normal amount of rain. Then we got a moderate snowfall on 23 December, just in time for the Christmas celebrations. On December 27, the wind and rain returned, turning the streets into ice-courses. On New Year's Eve, the snow came back and now, we have some 40 cm of fresh snow, while the weather has changed once again, and we have -15°C and clear skies, with wonderful Northern Light spectacles.

I read a report of someone on a birding trip, the first day of 2017, in coastal California. Poor guy! — The weather restricted his day list to 120 bird species. Here in Tromsø, my bird list on January 1st was one bird, the ever-present Magpie. Of course the lack of daylight and my hearing problems do not help.

But 2 January was a better day, and I added the Hooded Crow, the Common Eider, the Mallard, and the Herring Gull along the shore, and a single Great Tit, probably the most common small bird here in winter, in the garden. So now I am all the way up to six year birds, thanks to the good weather of the last days.

9 January —  My year-list has soared all the way up to eight species. Number 7 was a flock of House Sparrows (common, but very patchy here). And Number 8 was a real surprise: a male European Blackbird rummaging about in the snow this morning. 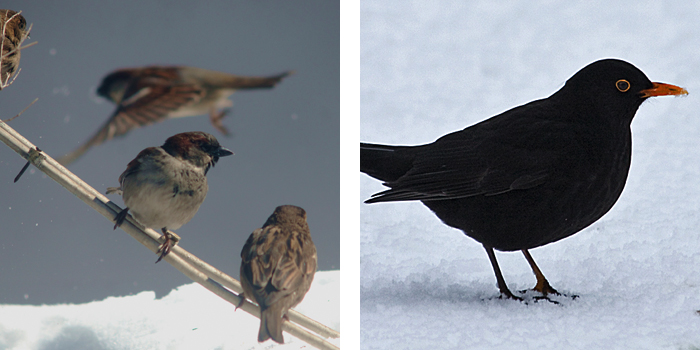 This is one more southern species that slowly is expanding northwards, most probably a result of global warming. I have seen blackbirds (always males) here once or twice in the last three winters, once even in my garden, but only once before in the almost 40 years I have lived here. There are blackbirds in the forest a bit south of here, where one hears the wonderful song in spring; but there they are quite shy forest birds, just as they probably were in most of Europe in earlier centuries.

So there is always change, and it is most interesting to follow this for many years in one place.

Happy New Year to you, Wim! And thanks for sharing your new year's bird list with us. We hope that 2017 will be FILLED with birds for you!