Tromsø had an unusually cold May, even for here, and the returning migrants were all a few weeks later than usual.  The birches, the dominant trees here, were largely bare still in early June, and the temperature was 5°C. 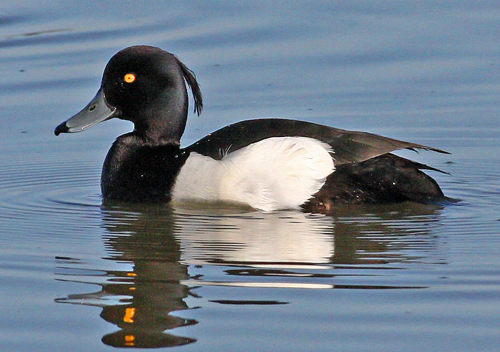 Then, a wonderful period of what we call “Russian weather” brought southeast winds, clear skies, and temperatures some days exceeding 20°C. That may not seem all that warm to you, but in such circumstances there is no better place to be in the world — remember we have sun 24 hours per day this month. The birches are now fully green, lots of spring flowers have appeared, and, as the summer moves very fast here, I have already seen the first summer flowers. 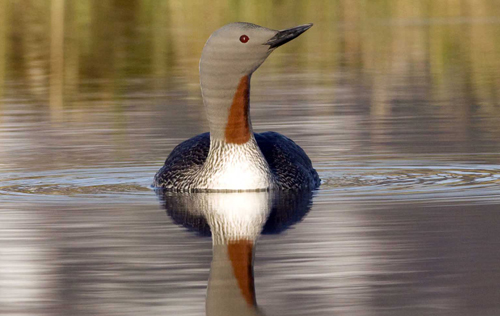 Not long ago, I led a walk around the city lake Prestvannet, a small and shallow lake, partly artificial. It is almost in town, and many families come on the weekends to feed the ducks (mainly Mallards, but also Tufted Ducks); in practice they have to work hard to avoid mainly feeding the Common Gulls, of which there is a large colony on marshland around the lake. There is also a smaller colony of terns, largely Arctic Terns, but also some Common. The main glory of the lake is the surprisingly large number of Red-throated Loons (or Divers), that nest on the mud islands in the lake and that have become quite accustomed to all the people; numbers have built up slowly and now we have as many as 10 pairs.

The drive “around the Balsfjord” is some 250 kilometres, so a long drive, but the landscape is wonderfully beautiful almost everywhere here, with the white mountains mirrored in the deep Balsfjord, and all the small rivers almost overfull of melt water in this warm weather . I start out with a walk along the road, and gradually I hear all the usual suspects. Our most numerous bird, the Willow Warbler, is co-dominant with the Redwing Thrush, and also the other two of the “big 4” are present — the Brambling and the loud and scratchy Fieldfare.

Chaffinches and Chiffchaffs are relative newcomers from the south, Pied Flycatchers occupy nestboxes near the summer cabins, and the Ravens of the steep mountainside keep on a constant conversation. But I hear also a very different yodeling sound from the fjord below: a very late Yellow-billed Loon (White-billed Diver), a species that winters here but breeds in Siberia.

My second walk is in a more open area, and I always park at the same farm, one of the few where every year a few Barn Swallows nest. To my astonishment, this time they are accompanied by several pairs of House Martins, the very first time that I have found this species on houses in Tromsø. Otherwise, more usual suspects slowly make the day list grow, although as always a few birds fail to show up: no tits here today, no Bullfinch, and no Woodpigeon, another newcomer. But in the tree where I once saw a Sea Eagle — and where I since then always look in vain every time — today an eagle sat in exactly the same spot again. Large flocks of Velvet Scoters in the fjord still, but only a single pair of Long-tailed Ducks and four Goosanders [known to North Americans as Common Mergansers]. 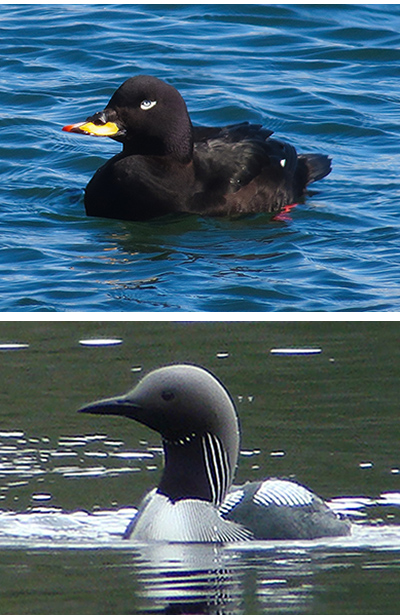 Another fixed point on this round trip is the lake Sagelvvatn near “the bottom of the fjord.” Amazingly, one-fifth of the lake is still ice-covered, and at the usual nesting place of the Slavonian (Horned) Grebes, there is as yet no possibility to build a nest; the grebes are probably still on the fjord. There are several pairs of Goldeneyes and one pair of Common Scoters on the lake, as well as a single Black-throated Loon (Diver). 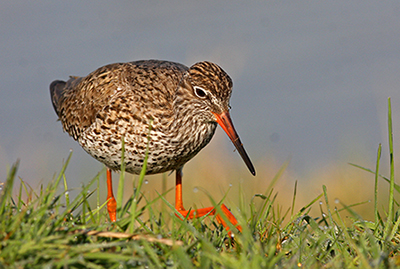 The coastal wetland of Tisnes is always worth visiting, even now after all the Red Knots have moved on. There used to be a good lek of Ruffs here, but there are fewer returning every year, and this time I saw only one. Here are also always Redshanks, various ducks, and Golden Plovers awaiting the disappearance of the snow from their hilly nesting places. Quite often, and also this time, a Short-eared Owl is hunting the area.

Today the wind had veered more easterly and the temperature had dropped to some 16°C, but still sun and blue skies for 24 hours. So I drove the 35 kilometres to the Rakfjord marshes, a quite different environment. The rocks here are acid and hard, and the area is always much later than the chalk-rich places in and south of Tromsø. The marshes still look quite bleak, but there was some display by the dominant large birds here, the Whimbrels, and I saw also a single Arctic Skua (Parasitic Jaeger), another species that seems to be steadily in decrease here. Meadow Pipits galore here, and as soon as there are some willow bushes, Willow Warblers sing, and Willow Grouse murmur. In a larger willow copse, I thought I heard a Bluethroat, but try as I did, I never saw that bird. However, first I discovered a Sedge Warbler, then a Reed Bunting, and in the end the great prize of these days, a

Little Bunting, only the third time I have seen this Siberian species in Norway. The Whooper Swans had returned to their nesting lake, and that same lake this time also held a pair of Black-throated Loons (Divers).

Birds usually present but missed this time are Common Teal, Shelduck, Northern Wheatear, and Willow Tit. Also Blue Tit and Common Jay are slowly establishing themselves in our area. And the coast has various auks, Rock Pipits, and often Twite.

I saw many more birds than I have named – It’s a good time of year to visit Tromsø.

Check out Wim Vader's blog, Birding in Norway - 70 Degrees North, from the winter solstice in 2016.

Most photos seen here were not actually taken in Tromsø. Many thanks to the photographers who contributed the following photos, listed in the order seen above:

Be sure to see Wim Vader's winter solstice blog