The goal of the Next Generation grant program is to promote the adoption of BirdNote resources by educators and to develop new BirdNote content with media producers locally, regionally, and nationally, in order to reach a younger audience with our stories. Together with our partners, we aim to inspire young people to notice, care for, and take steps to support birds and conservation.

Following a committee-guided application and review process in 2017, we awarded seed grants to four environmental education programs and to three media producers. 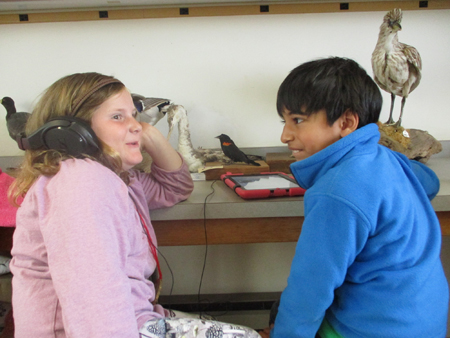 NatureBridge, California NatureBridge created a new community science project using BirdNote and eBird, built around Next Generation Science Standards. Educators oriented students to the birds they might expect to see in the field by playing and reading BirdNote stories to them. An “each one teach one” model was used, with students telling the story of a particular bird using BirdNote stories printed on laminated cards. Students then observed and noted the species they saw in the field. NatureBridge also added BirdNote content extensions to their Bird Beak Buffet and Skins and Skulls curricula. NatureBridge plans to share their curricula at the NatureBridge Education Summit in November. They will also add it to the free and searchable online database of curricula on their website. 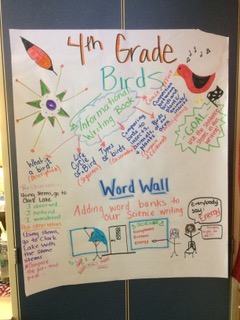 A "word wall" at Martin Sortun

Martin Sortun Elementary Martin Sortun Elementary School in Washington State used BirdNote resources in their 4th-grade STEM (science, technology, engineering, and mathematics) research project about the interconnections between plants, birds, and people. With the help of BirdNote stories, teachers introduced the students to certain birds. The students then researched the birds online and looked for them at their research site, the protected wetlands of Clark Lake. The project culminated in “show-and-tell” sessions, where students shared their projects with 3rd-graders and with their families. Multiple schools and organizations also visited to learn about the teachers’ project-based learning curricula, STEM integration opportunities, Next Generation Science Standards inclusion, and BirdNote.org as a supplementary resource. This “open house” was documented in a video shared online via Washington STEM.

For the Birds, Audubon NY in New York used BirdNote in their after-school program at two sites. After listening to BirdNote stories, students researched bird topics and used their findings to create podcasts about birds in their neighborhoods.

Caesar Kleberg Wildlife Research Institute, Texas, is planning to use BirdNote stories to support the development of new lesson plans that use examples of soaring, thermals, kettles, regulating body temperature, stride length, body shape, optics and iridescence of feathers to illustrate key biological and physical theories. They also plan to promote these lesson plans to teachers in their professional development program. Lesson plans are expected to be completed by September 2019.

North American Alliance of Environmental Education National Conference
The capstone to our work with environmental educators in 2018 was a BirdNote appearance at the NAAEE conference held in Spokane. Managing producer Jason Saul and producing program partner Lisa Eschenbach of E3 Washington presented a session called “Impactful Storytelling for and by Students.” They highlighted ways to harness storytelling in environmental education using examples from the BirdNote archives. The conference also allowed the team the opportunity to promote the Next Generation program for 2019.

Media Grants
BirdNote's managing producer, Jason Saul, also contracted with three independent producer teams to develop and create new media for young audiences. Two of the resulting projects were broadcast as daily shows. They were also developed into full-length features for podcast, allowing us to experiment with a multi-channel approach to new audience development.

Next Generation media reached millions of BirdNote’s traditional listeners and engaged, documented, and supported a new audience of young people in their love of birds. Next Generation curriculum served approximately 800 students in environmental education settings, with the potential to reach thousands more as new curricula is distributed on BirdNote and grantee channels.

Next Generation programs have allowed us to successfully test new models and channels for storytelling. The projects have shown us how to engage a youth audience and share their stories authentically and in their own voices, rather than reporting about them for an older audience.

Likewise, our partnerships with environmental education programs have revealed great potential for the adoption of BirdNote in educational settings, helping us to understand pathways to that goal. We expect our grantee partner collaborations to continue, built as they are on open and collegial exchange.

BirdNote: Next Generation is made possible by generous support from the Falconer Family of Seattle, the Bobolink Foundation, the Treeline Foundation, and the Peg and Rick Young Foundation.

To add your support for bird-focused storytelling by, with and for young people, please make your gift today. Just note "Next Generation" in the comments section of the form. Thank you!