The Field Museum in Chicago is one of the world’s largest museums of natural history. In one visit, attendees can walk through the streets of ancient Egypt, see the skeleton of a titanosaur, and learn what meteorites tell us about the solar system. All before lunch! 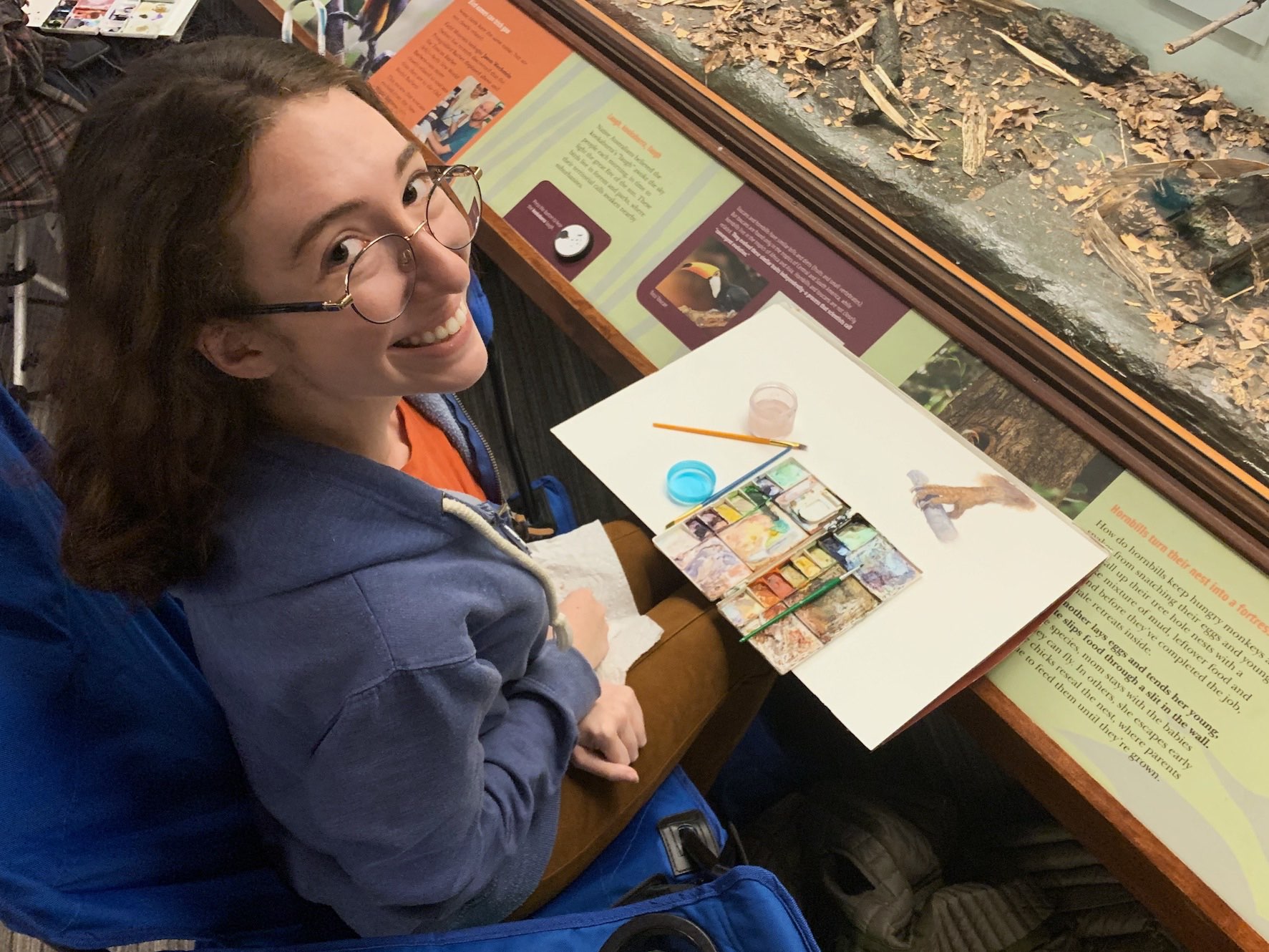 “Studying these birds gives me a sense of appreciation and value for what we have right now.” – Michelle Flitman, junior at School of the Art Institute of Chicago

The Field Museum also houses an impressive collection of over 1,000 bird specimens in the Ronald and Christina Gidwitz Hall of Birds. 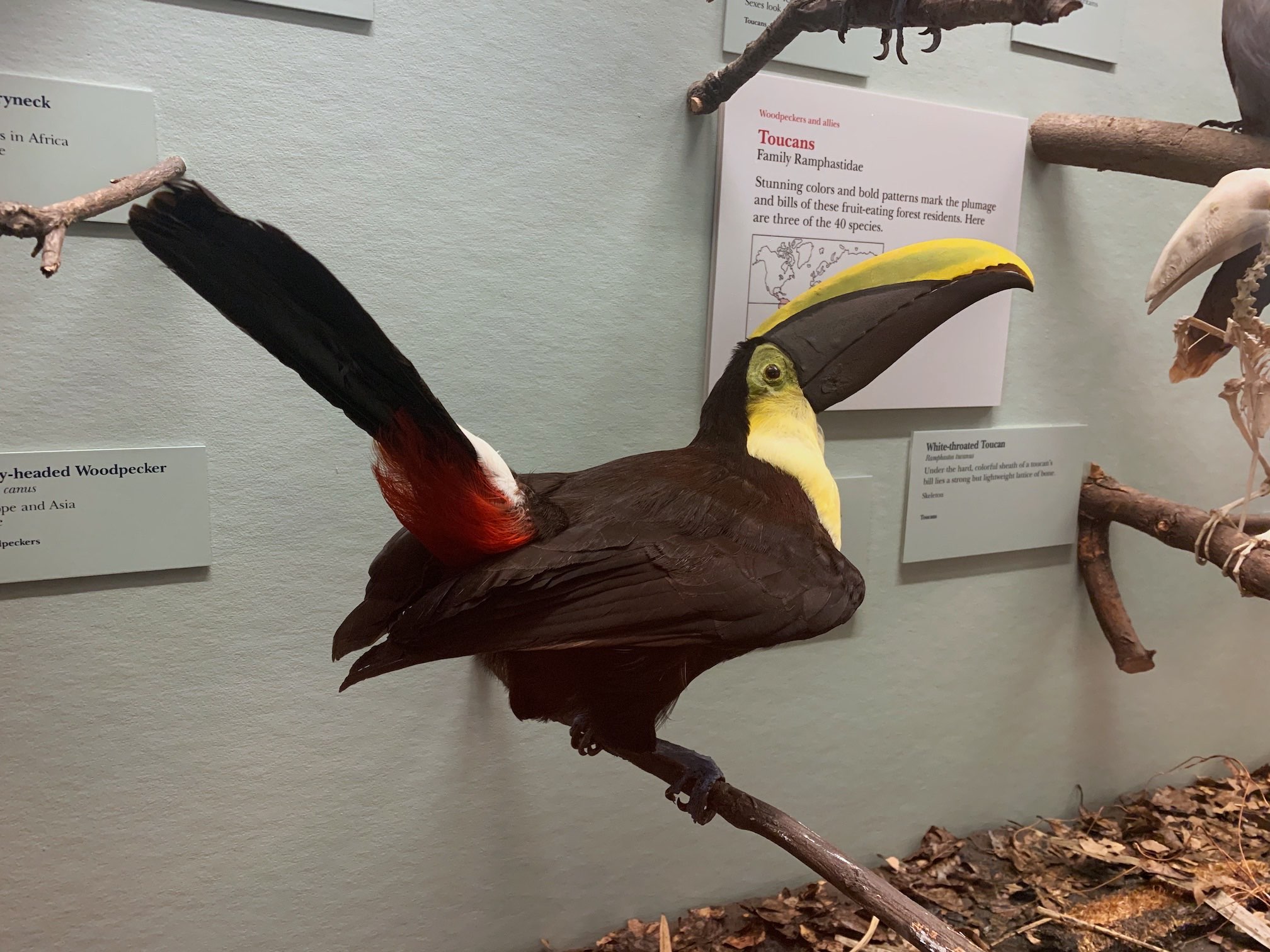 Last November, college students from the School of the Art Institute of Chicago took a trip to the museum for a natural history illustration class. The students were there to paint detailed illustrations, or “studies,” of the museum’s collection of birds, and were tasked with painting three bird heads and three birds’ feet.

Students spread out across the massive hall, sitting in camping chairs as they began their meticulous work.

BirdNote producer Mark Bramhill spoke with a few of the students, including junior Michelle Flitman. Michelle was painting a Rufous Hornbill, a bird native to the Philippines.

“Right now I'm studying the feet,” she said. “I'm especially interested in how thick the legs are and those massive talons. The general shape of its feet seems so powerful, as opposed to other birds, which have these skinny little legs.” 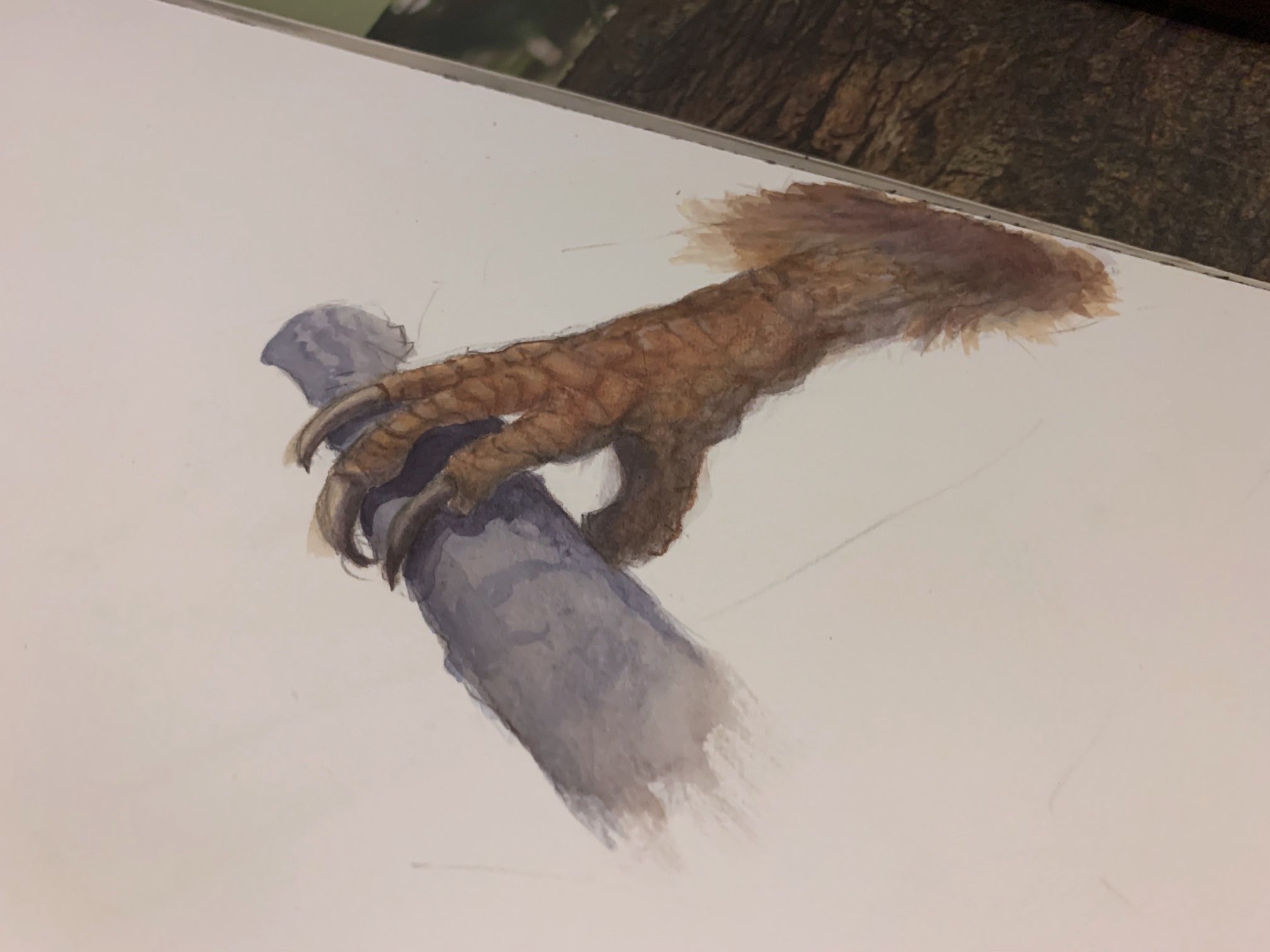 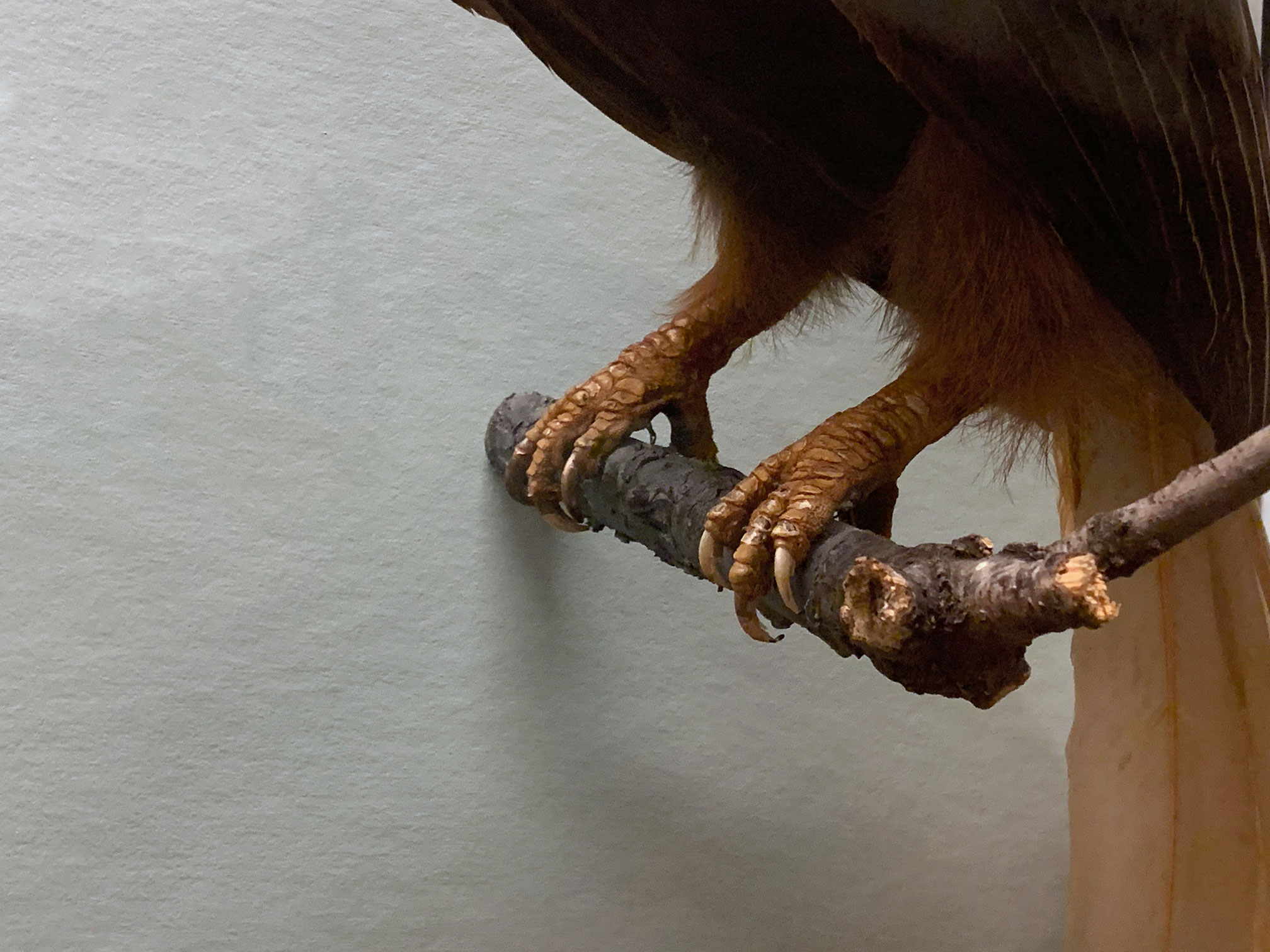 Michelle explained her process for figuring out which tones to use for the hornbill:

“I am doing the underpainting, so we're starting with blues and yellows to get the shadows and highlights. And, when we go over it in a top color, we're gonna try and figure out all the different tones.” 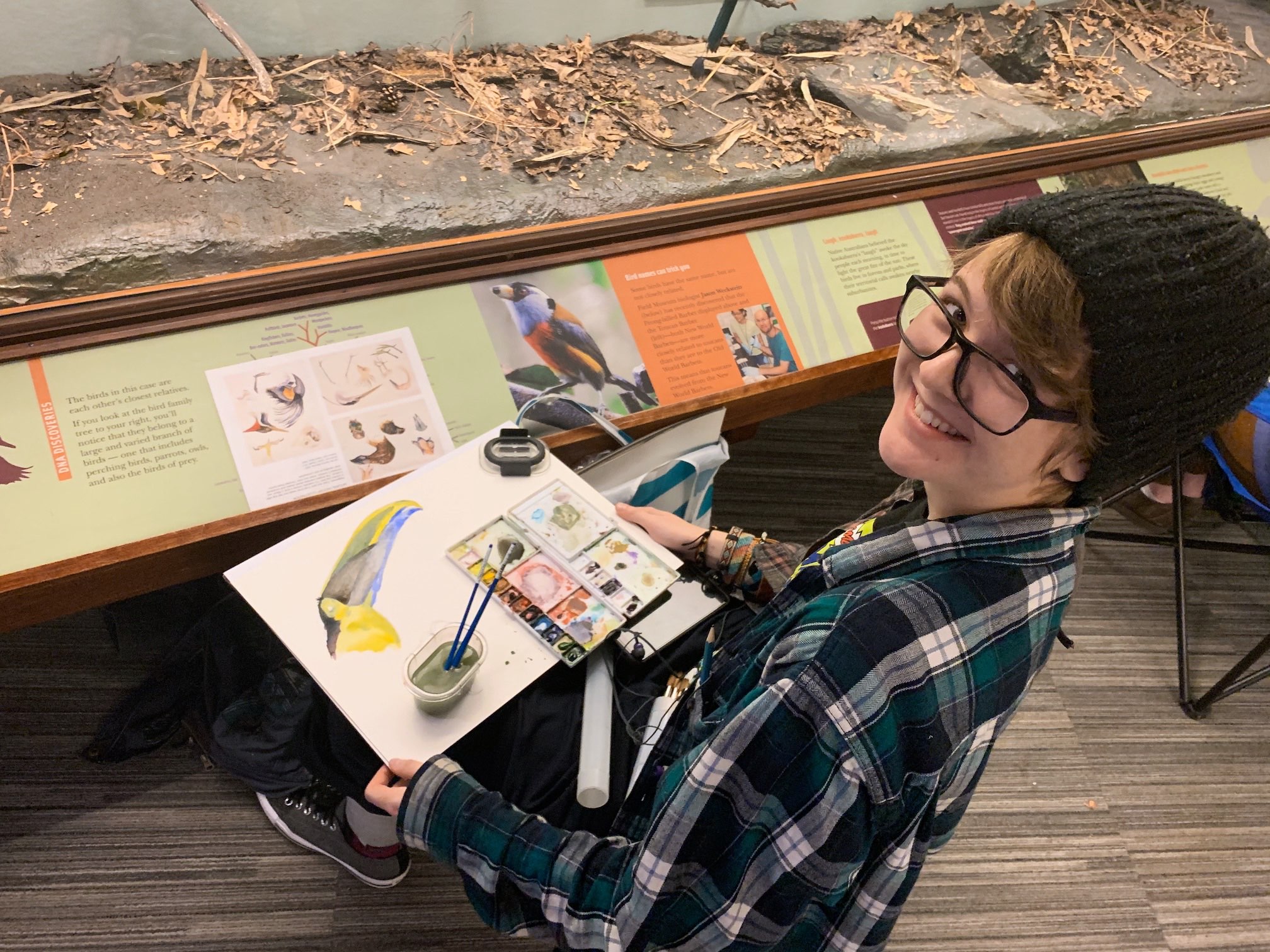 Nearby, sophomore Sam Hoffman had a little more trouble deciding which bird to start with, “because they're all so cool and [the more] funky birds are just so much fun,” she explained.” But Sam eventually landed on the funky Chestnut-mandibled Toucan.

“They have a really neat beak,” Sam said. “I really liked the contrast between the bright yellow on the end of the beak and the black and the yellow in the face. They're just very cool looking, very pleasing to the eye.”

Later, as Michelle finished her study of the Rufous Hornbill, she knew which birds she would paint next: the Passenger Pigeons.

“It's an important note on the temporality of a species,” Michelle said. “Something such as a Passenger Pigeon can go from millions and people sort of taking advantage of them to now they're only here in the museum. I think studying these birds sort of gives me a sense of appreciation and value for what we have right now.”

You can see more of Michelle's artwork on her website. If you’re interested in learning more about Chicago’s Field Museum, you can check out their website. Although the museum’s still closed to the public, their site has great educational resources, videos, blogs, and a spectacular virtual experience.

Learn more about the species mentioned by Michelle and Sam:

All photos by Mark Bramhill