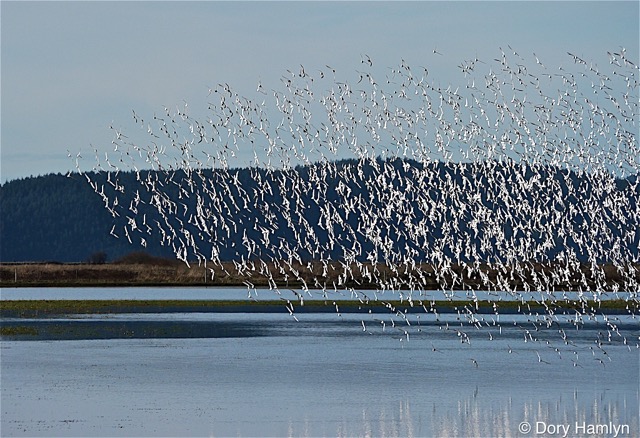 “Storytelling is really one of the most powerful tools in learning. It puts facts into context so we can relate to them.” -Ray Hamlyn

The fight to #BringBirdsBack starts with statistics. According to a 2019 study published in the journal Science, we have lost 2.9 billion breeding birds in North America since 1970, or 29% of the population. For scientists and bird-lovers alike, these numbers are shocking. But can statistics alone communicate the gravity of this crisis?

Conservation messages are vital, but the way we send them is just as important.

That’s why I wanted to talk to Ray and Dory Hamlyn. They’re a husband-and-wife expedition travel team who produce remarkable wildlife videos and photos.  Their YouTube page features many magnificent species of birds displaying their unique behaviors. Enjoy the courtship display of a Buff-breasted Sandpiper on the Alaskan Tundra, or watch the wake-up routine of a Long-eared Owl, just before beginning its nocturnal hunt. The videos are accompanied by Ray’s tranquil narration, along with background music that always seems to perfectly fit the character of the featured animal.

It’s clear that Ray and Dory aren’t just chasing birds; they’re chasing the excitement of sharing their observations with the world. They capture birds and other wildlife on camera in a way that illustrates wonder and tells a captivating story.

“If you just describe a problem without a story, people are not so prone to do anything about it,” says Ray. “But if you tell a story and apply it to the situation so they see what’s happening, like the tremendous decline in bird populations, it’s a powerful way to convince people to fix what’s wrong.” 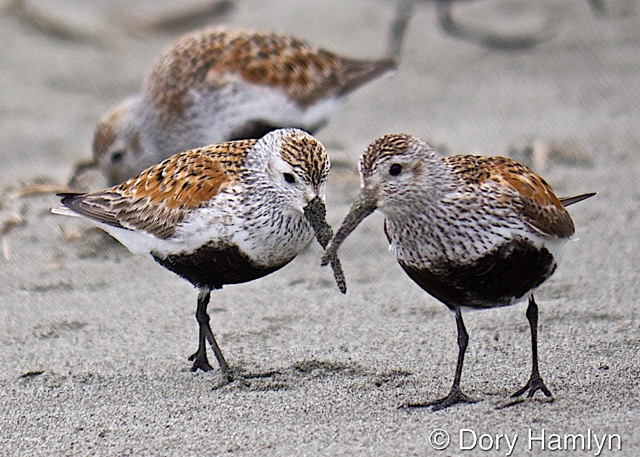 The Hamlyns are responsible for one of my all-time favorite videos on YouTube, called “Dance of the Dunlins”.

The video begins with a flock of Dunlin resting on a pond, underneath the extraordinary landscape of Washington State’s Skagit Valley. After a brief introduction from Ray, the Dunlin Dance begins as the birds attempt to avoid a dive-bombing Peregrine Falcon. The result is an eight-minute ballet in mid-air, captured by the Hamlyns as one continuous shot. All the while, we hear triumphant symphonic music swelling along with the flock.

Ray and Dory had been working hard for three years to capture this dance. “I got so much footage of Dunlins at such distances under bad lighting, but that didn’t really tell a story,” Ray recounts. “Then, that one day, everything came together. Perfect weather, perfect lighting, super large flock… everything happened right, and then it just kept going! It was awesome.”

The video is so vivid that I had to ask what it was like to witness such a spectacle.

Dory says the most remarkable thing about that day was being so close as the birds started to land. “You could reach up and almost touch them,” she recalls. “It was just like being caught in the middle of a Dunlin cloud.”

Ray and Dory invite their audience to experience that sense of wonder and joy through the camera.

“Part of doing videos like this is just being a storyteller, like BirdNote,” Ray tells me. “And the more people you can reach, the more people will understand birds and have an appreciation for what birds do.”

Hearing that 3 billion birds in North America have vanished since 1970  is definitely staggering. But witnessing the dance of the Dunlin and learning that shorebird populations have declined by one-third might be enough inspiration to take conservation action. 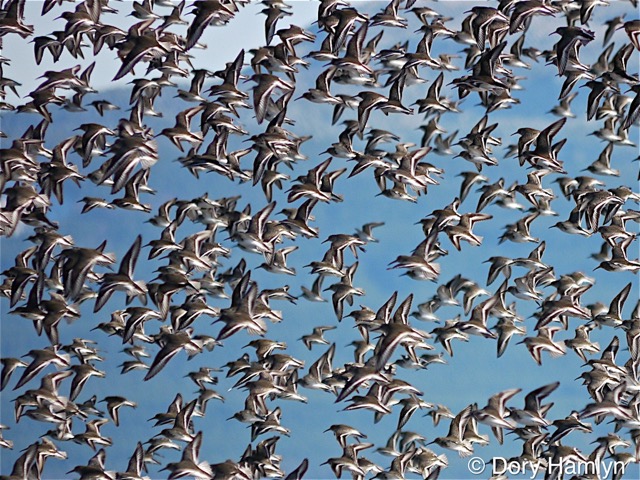 I asked the Hamlyns what BirdNote fans can do to support birds, and I got some great suggestions:

Be sure to subscribe to the Hamlyns’ YouTube channel, where you can immerse yourself in extraordinary encounters with wildlife.

Here are some of my favorites:

All photos by Dory Hamlyn