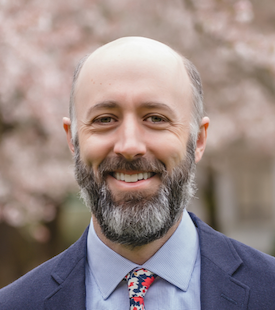 Nick comes to us most recently from the City of Tacoma’s Office of Equity and Human Rights, where he led strategy and policy development for racial equity in hiring and governance. He also brings strong experience leading and growing nonprofits and working with local communities on conservation and public education.

We’re delighted to have him on board.

Prior to his work with the City of Tacoma, Washington, Nick served as director for the REACH Center, a Tacoma-based nonprofit that supports unhoused young people. During his time with REACH, the organization’s budget doubled from $1.3 to $2.5 million, allowing the agency to better serve more than 2,000 youth and young adults annually, providing wrap-around services including GED instruction, job training and behavioral health support.

“Nick brings demonstrated experience building and managing a nonprofit with tremendous potential,” said Tom Livingston, president of the BirdNote Board of Directors. “And we see BirdNote as a place brimming with potential. We’re excited to have Nick lead us in supporting new programs and reaching new audiences, making birding an accessible and inspiring way for communities around the country to connect with conservation.”

Nick first became enamored with birds 17 years ago during a year-long environmental education residency at the Teton Science Schools in Wyoming. He went on to join Peace Corps Paraguay as a Volunteer in the Environmental Education sector, and during his service, he created and co-hosted a trilingual weekly radio show focused on environment and health topics called “Mainumby Marandu Porã,” or “The Hummingbird’s Good News.” After his service in the Peace Corps, Nick worked as a development officer in the field of education and received his masters in public administration from Harvard’s Kennedy School of Government.

Nick steps into the helm at BirdNote following the retirement of Sallie Bodie, whose careful stewardship of BirdNote helped expand the reach of BirdNote Daily to more than 250 public radio stations nationwide. More recently, BirdNote has developed two acclaimed long-form podcasts: Threatened and Bring Birds Back.

“BirdNote has been a staple of our family radio diet for many years,” said Nick. “We are always grateful for the opportunity to learn something about the environment around us, appreciate our interconnectedness with all living beings, and experience the elements of surprise and fun that are trademarks of many BirdNote shows.”
Nick lives in Tacoma, Washington with his wife, Sedia, and their three children. They all enjoy playing music, taking weekend trips in the beautiful Northwest, and watching Anna’s Hummingbirds in their back yard.

Please join us in welcoming Nick!