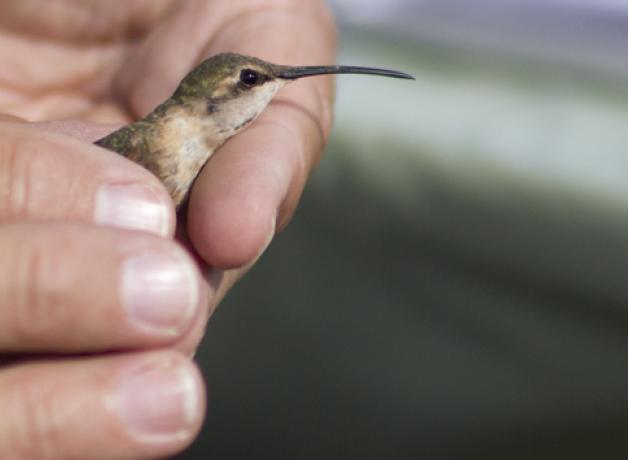 BirdNote contributor Alex Chadwick visited the outskirts of Big Bend National Park in Texas to meet with Kelly Bryan, a retired park manager and biologist who spends his days placing tiny bands on hummingbirds to better know their habits. Kelly has banded more than 14,000 birds!

Alex Chadwick: I’m watching Kelly work with the birds…tiny, colorful, delicate…held carefully in his blunt, working hands. He’s banded more than 14,000 hummingbirds, he says, and never injured one. He’s about to release this one.

KB: I'm gonna hold it up to your ear... Sounds like a little motor in overdrive, doesn't it?

AC: The bands are very small, uniquely numbered strips of aluminum, and one goes around one small bird leg above the foot.

KB: The human heart beats about 70-80 beats per minute. Even at rest, the hummingbird's heart is beatin' 7-800 beats a minute. And this little bird's probably at about 1200 beats a minute now.

Kelly studies hummingbirds by banding legs and keeping data on each one.

KB: Okay, here comes the first bird….gonna reach into this bag. And the thing about hummingbirds is you've got to maintain control of them.

AC:  It can be unnerving to see a captured hummingbird, vulnerable and wide-eyed. Kelly has his fingers over the shoulders, to stop the wings beating. He slips a tiny numbered band on a leg, measures length of feathers and the bill, and then weighs the bird.

KB: You could put about eight of these birds in an envelope and mail 'em.

AC: Eight to an ounce.

AC: For BirdNote, this is Alex Chadwick in Big Bend National Park.

Funding for this BirdNote series on Big Bend National Park comes from Deedie and Rusty Rose.