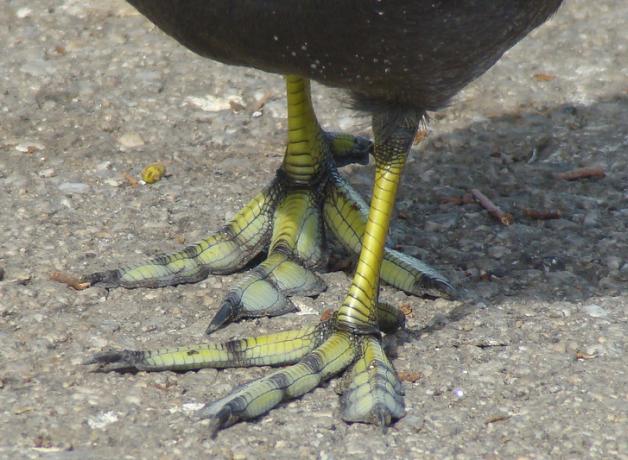 American Coots settle onto lakes and estuaries, forming rafts of hundreds, even thousands, of birds. They like to feed on aquatic vegetation, and sometimes they lumber ashore to nibble at grasses and agricultural crops. The coot's lobed toes help it swim and maneuver under water. To get airborne, the coot requires a long, running takeoff. Be sure to watch the video of coots feeding at a lake.

This is BirdNote! [Winter coots calling]
It’s a calm winter morning. The lake is still. What is that sound? [Winter coots calling]
Ahhhh… the cackling, grunting, and croaking of American Coots, calling to one another. [More coots] Coots are plump, chicken-like water birds…very dark-gray. They settle onto lakes and estuaries, forming rafts of hundreds, even thousands, of birds. They like to feed on aquatic vegetation, and sometimes they lumber ashore to nibble at grasses and agricultural crops. (Whisper) Here come a few now!

Check out the yellow-orange legs and feet! [Editor's note: their legs and feet are more often described as "yellow-green".] Look carefully and you’ll see an unusual adaptation, not the usual webs. Instead, coots have lobed toes to help them swim and maneuver under water.
Although they are excellent swimmers, coots are awkward and clumsy fliers. To get airborne, they require long, running takeoffs. There are some now….trying to take flight ….flapping their wings and slapping their lobed toes against the surface of the water. [Coots taking flight]
All that effort usually produces only short flights, within twenty feet of the surface. Already they’re settling back onto the water. [More coot vocalizations]
For BirdNote, I’m Michael Stein
###
Sounds of American Coots provided by Martyn Stewart of Naturesound.org
Producer: John Kessler
Executive Producer: Chris Peterson
© 2009-2017 Tune In to Nature.  February 2018/2022  Narrator: Michael Stein
ID#  AMCO-02-2009-02-06  AMCO-02 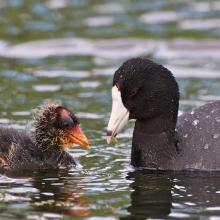 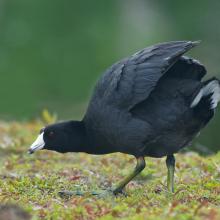 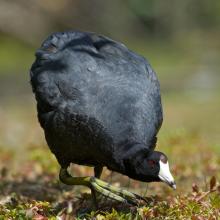 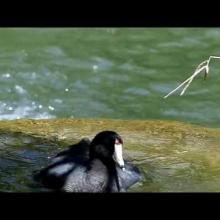 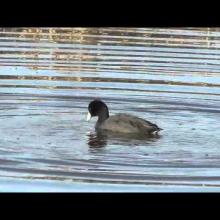 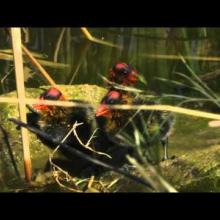