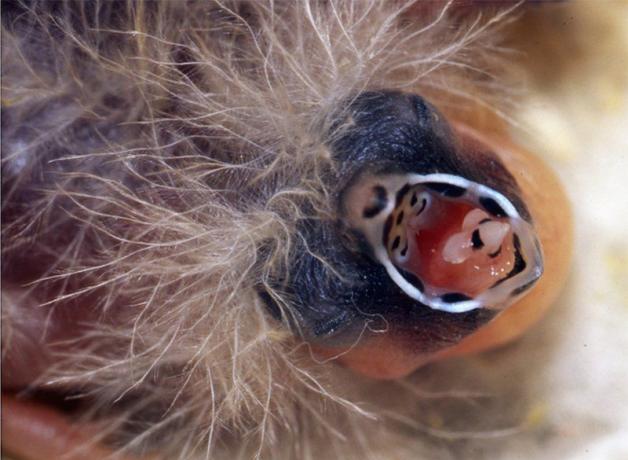 Most baby birds are adorable little floofs — but not all of them. The tongue and palate of estrildid finch chicks are strangely spotted and ringed. They display these markings while they beg for food. Most species’ chicks have mouth markings in colors ranging from black or white to bright yellow, orange, red or blue. The function of these markings has long puzzled scientists.

This is BirdNote.
Most baby birds are adorable little floofs — but not all of them. Baby estrildid finches look downright creepy.
[Black-crowned Waxbill chicks begging, https://www.xeno-canto.org/194269, 0.00-0.06]
About 140 species of estrildid finches, including waxbills, parrotfinches and firefinches, are spread across Africa, Asia and Australia.
Newborn finches beg their parents for food, mouths wide open. The tongue and palate are strangely spotted and ringed. Most species’ chicks have mouth markings in colors ranging from black or white to bright yellow, orange, red or blue.
[Common Waxbill song, https://www.xeno-canto.org/42418, 0.00-.04]
The function of these markings has long puzzled scientists. Some say that they make baby beaks visible to parents delivering food to poorly lit nests. Others think the markings signal the health of the chicks.
And there’s a third school of thought. Other birds target the nests of some African finches for egg-dumping, sneaking their eggs into the finches’ nest, and those foster chicks have similar colorful markings. So perhaps mouth markings evolved due to competition for food between finch babies and those other bird babies.
[Begging calls of juvenile Pin-tailed Whydahs fostered by Common Waxbills, https://macaulaylibrary.org/asset/312699931, 0.01-.07]
It’s not yet settled whether foster babies mimic the mouths of finch babies or vice-versa. Either way, they look equally bizarre.
For BirdNote, I’m Mary McCann.
###
Senior Producer: John Kessler
Production Manager: Allison Wilson
Producer: Mark Bramhill
Associate Producer: Ellen Blackstone
Digital Producer: Conor Gearin
Bird sounds provided by The Macaulay Library of Natural Sounds at the Cornell Lab of Ornithology, Ithaca, New York. Black-crowned Waxbill Xeno Canto 194269 recorded by B. Piot, Common Waxbill Xeno Canto 42418 recorded by H. Cardoso, and Pin-tailed Whydah ML 312699931 recorded by G. Jamie.
BirdNote’s theme was composed and played by Nancy Rumbel and John Kessler.
© 2021 BirdNote      August 2021      Narrator: Mary McCann
ID#  bill-07-2021-08-20              bill-07

What's Up With the Weird Mouths of These Finch Chicks?