Birdsong Wanes with the Season

Many birds don't need to – and they're not even able to – sing! 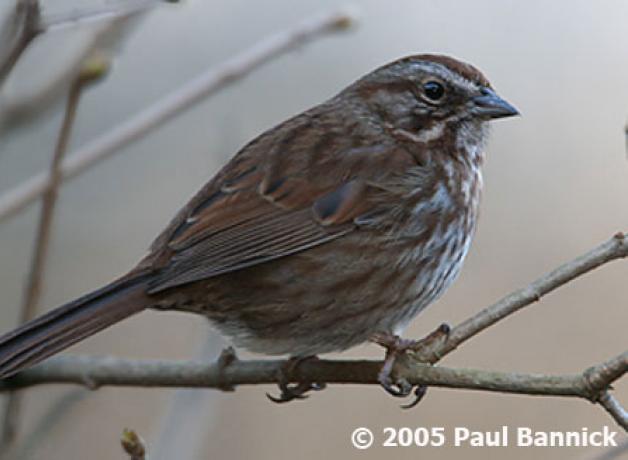 By this time in September, most migratory birds have departed. Many resident birds remain, but their voices are now quiet. During fall and winter, birds don't need to sing to establish a breeding territory or attract a mate. Many songbirds lose the ability to sing. The part of the brain used for singing shrinks to lighten the bird's body mass, perhaps protecting it from predators. This Song Sparrow, though, may sing through the winter.

BirdNote®
Birdsong Wanes with the Season

Adapted by Bob Sundstrom from a script written by Frances Wood

This is BirdNote!
[Song Sparrow song]
By this time in September, most migratory birds have departed, taking their songful voices with them.
Still, you may have noticed that even the voices of resident birds are less apparent. Like the song of a resident Song Sparrow, which we’ve heard all spring and summer, but now in the fall, only occasionally.
[Song Sparrow song]
Why the silence? During the non-breeding seasons of fall and winter, most birds don’t need to sing to establish a breeding territory and attract a mate. Many songbirds though, are still able to communicate with call and alarm notes. [Song Sparrow alarm call.]  But at this time of year, their brains simply can’t produce a song.
Many Song Sparrows sing – more or less often – all year long. The brown, streak-breasted Song Sparrow may not be the most eye-catching of our fall and winter birds, but it may be the most dependable singer. On brighter fall days and on clear, cold winter mornings with a touch of sun – listen for the Song Sparrow’s rich, melodic phrases.
[Song Sparrow song]
For BirdNote, I’m Mary McCann.

Song Sparrow - More at All About BirdsMake a gift to BirdNote