Chickadees Clean Up After the Youngsters

A simple solution that humans can only marvel at 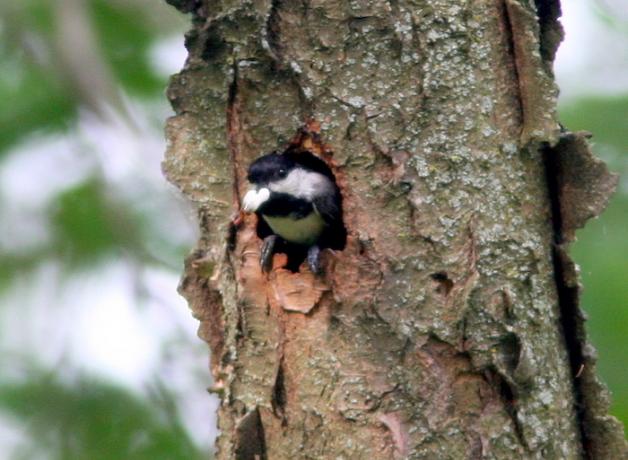 Imagine this Black-capped Chickadee flying toward its nest, carrying fresh insects for its chicks. A moment later, it emerges with a tiny white pouch in its bill. The chickadee drops the object into the vegetation below. That outgoing payload is a fecal sac, a remarkable adaptation found in nesting songbirds. Nestlings — often within seconds of being fed by an adult — excrete waste in tidy little sacs. Then the dutiful parent switches tasks, from meal delivery to waste management.

Chickadees Clean up after the Youngsters

An adult Black-capped Chickadee flies in toward its nest, carrying a beakful of fresh insects. Reaching a long-dead tree trunk, the bird disappears inside the nest cavity it’s excavated with its mate and delivers the goods to the impatient chicks within. [Black-capped Chickadee foraging calls http://macaulaylibrary.org/audio/51144 ]

A moment later, out pops the adult. But once again, it’s carrying something in its bill — what looks like a tiny white pouch. Still on the wing, the chickadee drops the object into the vegetation below.

That outgoing payload was a fecal sac, a remarkable adaptation found in nesting songbirds. Nestlings, often within seconds of begin fed by the adult, excrete waste in tidy little sacs with a gelatinous outer coating. The dutiful parent bird now switches tasks, from meal delivery to waste management. By dropping the sac a safe distance from the nest, the birds tidy the nest while discarding clues a predator might use to detect vulnerable nestlings. [Black-capped Chickadee calls, http://macaulaylibrary.org/audio/98802 ]

The fecal sac. For anyone who has ever changed a diaper, it’s a simple solution we can only marvel at.

A Tree Swallow removes a fecal sac from its nest - check it out!Learn more about fecal sacsCheck out this video of robins performing their parental dutiesBlack-capped Chickadee – More at the Audubon Guide to North American Birds