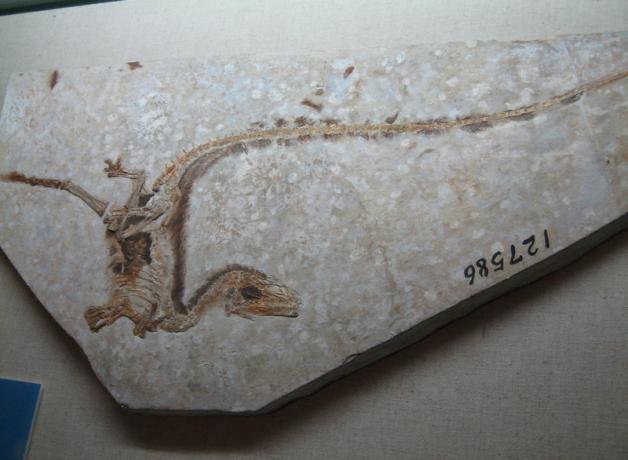 In the mid-1990s, a golden age of fossil discovery began in the Liaoning region of northeast China. The fossils date from 120 to 160 million years ago, when feathered dinosaurs and early birds were flourishing and differentiating. The signature fossil was the world’s first-known feathered dinosaur, Sinosauropteryx, “the China dragon bird.”

In the mid-1990s, a golden age of fossil discovery began in northeast China. Mesozoic fossils unearthed in the Liaoning (lee-OW---NING https://www.dictionary.com/browse/liaoning) region date from 120 to 160 million years ago. It was a time when feathered dinosaurs and early birds were both flourishing—and differentiating. It’s a crucial period for understanding the evolution of birds and their connection to feathered dinosaurs. And the quality and diversity of the fossils has blown scientists away.

One volcanic eruption after another covered animals with mud and fine particles of ash.  This prevented decomposition and preserved soft body parts as well as bones, a rare result reminiscent of Pompeii. Some dinosaurs were so well preserved that even their stomach contents can be examined.

The signature fossil of Liaoning found in the 1990s was the world’s first-known feathered dinosaur, Sinosauropteryx, (si-noh-sor-OP-tur-ix) “the China dragon bird”. Dozens more species have since turned up. One show-stopper is a small flying dinosaur, Microraptor, with four wing-like appendages.
(Merlin ML105837)

There’s no telling what will turn up next.