This bird traps herself with her kids! 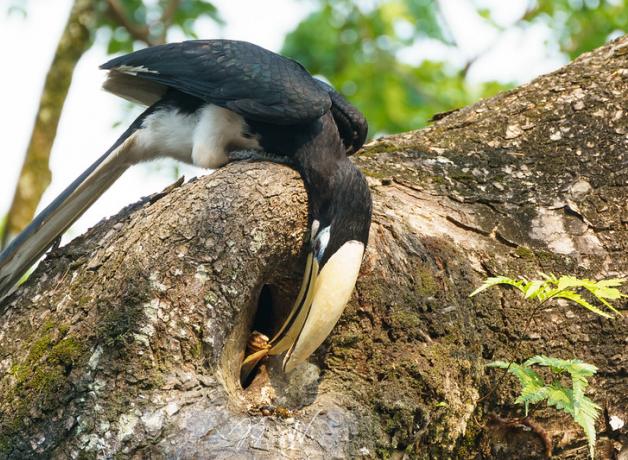 Does staying cooped up inside with your kids sometimes drive you up the wall? Take comfort in the bird that does it year after year — the hornbill. Each breeding season, a female hornbill plasters herself into her nest cavity, leaving only a thin slot for ventilation and food. She stays there for months to raise her young, while her mate brings her food.

This is BirdNote.
[Call of a Black-and-white-casqued Hornbill, https://macaulaylibrary.org/asset/107795, 0.25-.30]
Does staying cooped up inside with your kids drive you up the wall? Take comfort in the bird that does it year after year — the hornbill.
Each breeding season, a female hornbill imprisons herself in a tree cavity and takes on the task of raising her young.
In the days leading up to her “nest arrest,” the female starts blocking the entrance to her nest with a plaster of mud, bark and poop. Once the entrance becomes so small that she can barely squeeze through it, the female slips inside and fills the gap — except for a thin slot for ventilation and food. She stays in there for months, incubating her eggs and raising the chicks.
While she’s busy at that, the male brings fresh fruits and a variety of animal protein. At last, when the nest becomes just too cramped, the female escapes the nest and frees herself.
[Hornbill call and wingbeats, https://www.xeno-canto.org/101151, 0.20-.23]
The young either follow her out or re-seal the entrance and remain in the nest until they’re ready to fledge.
Most of the 61 hornbill species in the world exhibit these strange behaviors. Locking down provides nesting hornbills some protection from predators and wards off other hornbill pairs looking for a place to nest.
[Hornbill laughter, https://macaulaylibrary.org/asset/21293, 0.18-.28]
For BirdNote, I’m Mary McCann.
###
Senior Producer: John Kessler
Production Manager: Allison Wilson
Producer: Mark Bramhill
Associate Producer: Ellen Blackstone
Digital Producer: Conor Gearin
Bird sounds provided by The Macaulay Library of Natural Sounds at the Cornell Lab of Ornithology, Ithaca, New York. Black-and-white-casqued Hornbill ML107795 recorded by C. McBride, Black-and-white-casqued Hornbill XC 101151 recorded by J. and D. Bradley, and Black-and-white-casqued Hornbill ML 21293 recorded by D. and M. Zimmerman.
BirdNote’s theme was composed and played by Nancy Rumbel and John Kessler.
© 2021 BirdNote      Narrator: Mary McCann 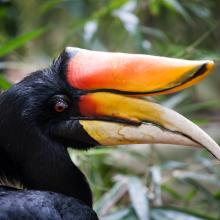 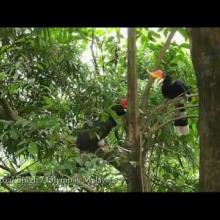 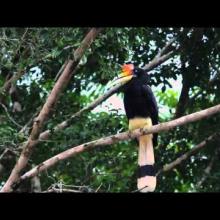 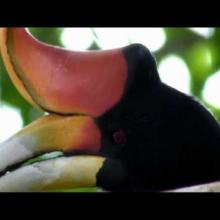