Hummingbirds make it look easy, but it’s not! 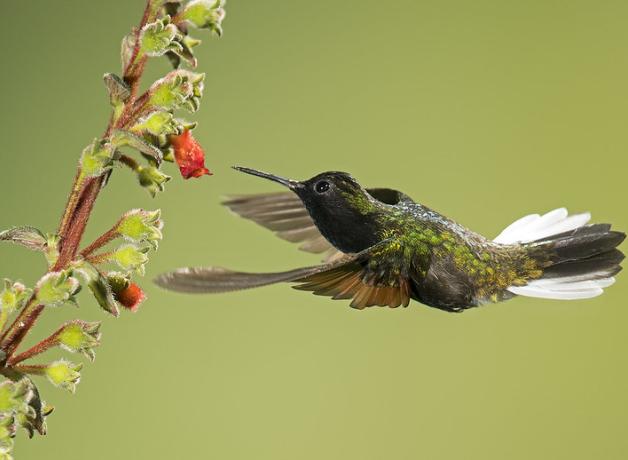 Hummingbirds are built for hovering flight, with flexible wrists that rotate their wings in a rapid figure-eight motion that generates almost constant lift. Eurasian Skylarks, on the other hand, hovers by fluttering its wings 10-12 times per second, singing all the while. Some raptors such as American Kestrels use a different strategy: by flying into the wind, they can float in place while they scan for prey.

But wind tunnel experiments with flying birds show that hovering is hard work! As one scientist put it, a hovering hummingbird “represents the upper limit of aerobic locomotion in vertebrates.”

In other words, hummingbirds are athletes on par with galloping horses or humans running a marathon. But hummingbirds aren’t the only flyers up to the challenge. Eurasian Skylarks even sing while hovering, sometimes for minutes on end.

Different from a hummingbird, a lark flutters its wings 10 to 12 times per second, relying entirely on lift produced by the downstroke.

Other small birds hover briefly. In search of insects, tiny birds like kinglets float above the tips of branches for just a few seconds.

Even larger birds like hawks and kites make use of head-on breezes in what’s called “wind hovering,” when they search the ground for prey. The kestrel is a master of wind hovering. Flapping forward but counterbalanced by the wind, the kestrel appears tethered to the ground by a string.

So while hummers might be the most impressive hoverers, they’re not the only birds to employ this gravity-defying maneuver. 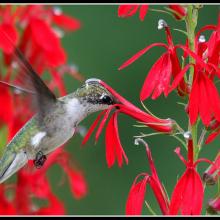 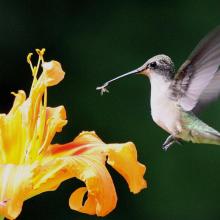