Those long toes are made for walkin’

The strange wading birds known as jacanas are nick-named "lily-trotters" for their ability to walk on lilypads. In Jamaica, they're known as "Jesus birds," because they appear to be walking on water — a feat made possible by their long toes. But that's not all that's cool about jacanas. The males, including the Comb-crested Jacana pictured here, can carry their young under their wings. Picture this colorful wading bird, crouching down and spreading his wings. The young scoot in under him, and he sweeps them up and carries them off, tiny legs dangling from under his wings. Check out the video!

The Northern Jacana (for information about pronunciation, please see below*), found in Mexico, Central and South America, and Cuba. And the bird with the longest toes -- relative to its body size -- of any bird. Those toes are l-o-n-g, and they're made for walkin'. Living in wetlands, Jacanas are nicknamed "lily-trotters," for their ability to walk on lilypads. In Jamaica, they're known as "Jesus birds," because it looks as if they're walking on water. Feats possible only because of those toes. [LNS #140224 2:40 and 3:14]

But that's not all that's cool about the jacana. The males carry their young under their wings. Now, you've seen a mother housecat -- kitten dangling from her mouth -- carrying kittens one by one to safety. Well, the male jacana will carry his young, too – except that he can carry several at once. [Northern Jacana LNS # 140224]

So picture this wildly colorful wading bird, crouching down and spreading his wings. The young move in under him, and he sweeps them up and carries them off, tiny legs dangling from under his wings. It doesn't look very comfortable for the young ones, but it sure is safe. [Northern Jacana LNS # 140224]

* "Jacana" can be pronounced in different ways. The word derives from an Indigenous Tupi word, jasaná, pronounced zhuh-sah-NAH, with the emphasis on the last syllable. In Portuguese, the bird is called jaçanã, with a soft c (cedilla.) In English, the c is usually pronounced as a hard c (a "k" sound. (Listen here: http://macaulaylibrary.org/audio/140224)  For a pronunciation in Brazilian Portuguese, check out Forvo.com: http://www.forvo.com/word/ja%C3%A7an%C3%A3/#pt 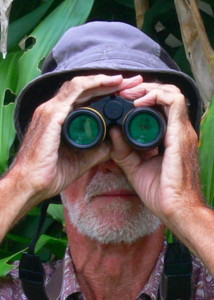 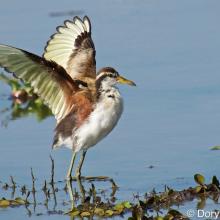 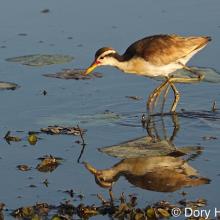 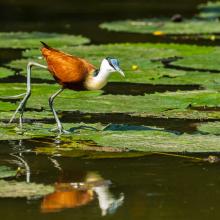 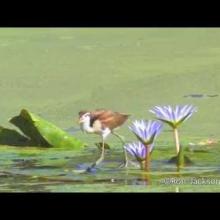 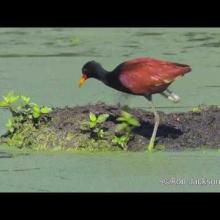