Kelp in the Eagles’ Nest 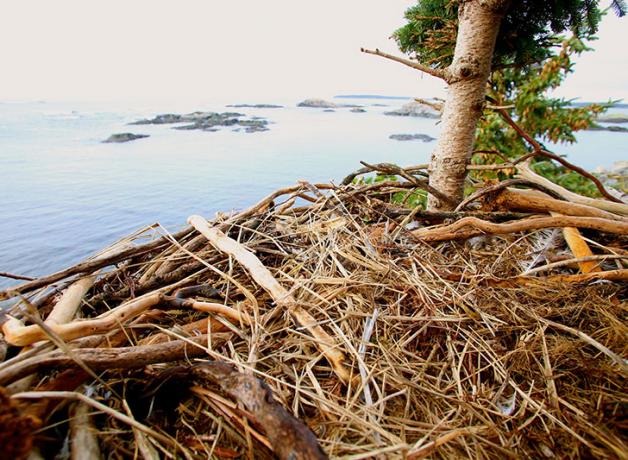 A pair of Bald Eagles will reuse their nest each year and repair it with new tree branches. But recently in British Columbia, scientists came across an eagle nest made largely out of dried kelp. Back in the ‘90s, that very nest had been made out of tree branches. What changed? Sea Otters were reintroduced to the landscape, which helped kelp forests flourish — and occasionally wind up in an eagle’s nest.

Kelp in the Eagles’ Nest

The Bald Eagle makes the largest nest of all birds in North America. Rather than building a new nest every year, a pair of eagles will repair their nest with new tree branches and reuse it.

During fieldwork in British Columbia in 2015, scientists came across an eagle nest made largely out of dried kelp. Back in the ‘90s though, that very nest had been made out of tree branches. Kelp, a type of seaweed, ended up in that eagle’s nest thanks to a furry neighbor.

By 1930, Sea Otters had been hunted to near extinction in British Columbia. But since their reintroduction in 1969, they’ve had a big impact on the coastal ecosystem.

By feeding on sea urchins, which destroy kelp, otters have aided the growth of underwater kelp forests. When kelp dies a natural death, it washes up on the beach and dries out — and sometimes ends up in an eagle’s nest.