Transforming to complete a 7,200-mile flight! 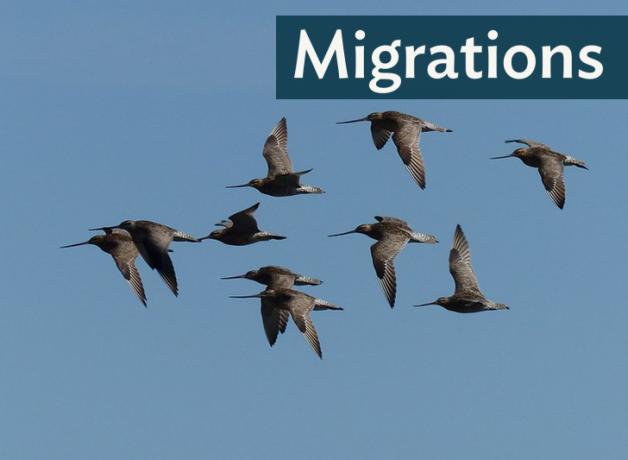 This Bar-tailed Godwit makes one of the longest migrations of any animal — a 7,200-mile non-stop flight each autumn from western Alaska to New Zealand. In his book A World on the Wing, Scott Weidensaul explores the remarkable transformation godwits undergo to make this migration possible. Their digestive organs shrink as their weight more than doubles in stored fats and muscle mass.

This is BirdNote.
[Bar-tailed Godwit calls: https://macaulaylibrary.org/asset/131254]
This Bar-tailed Godwit makes one of the longest migrations of any animal — a 7,200-mile non-stop flight each autumn from western Alaska to New Zealand in just eight or nine days. But how do these pigeon-sized shorebirds accomplish such an epic tour de force?
In his book A World on the Wing, Scott Weidensaul shares the incredible process Bar-tailed Godwits use to get into migratory shape.
“They accomplish this astounding feat by first larding themselves with thick layers of fat,” Weidensaul writes. They more than double their weight in about two weeks until he says that they “jiggle when they walk.”
But flight only gets harder the heavier you are, so how do the godwits compensate for adding all that fat? Well, they start by ditching the dead weight by radically reorganizing their innards.
Weidensaul explains that, “Digestive organs like the gizzard and intestines, which they no longer need, shrink and atrophy, while the pectoral muscles that power their long, slender wings double in mass, as does their heart muscle, and their lungs increase capacity.”
After leaving Alaska and flying uninterrupted for more than a week, the godwits arrive in New Zealand. Their first order of business? To restore their guts, of course!
[Bar-tailed Godwit calls: https://macaulaylibrary.org/asset/131254]
Other shorebirds shape up like this for migration, too. But none travel as far as the Bar-tailed Godwit.
For BirdNote, I’m Ariana Remmel.
###
Senior Producer: John Kessler
Production Manager: Allison Wilson
Producer: Mark Bramhill
Associate Producer: Ellen Blackstone
Digital Producer: Conor Gearin
Bird sounds provided by The Macaulay Library of Natural Sounds at the Cornell Lab of Ornithology, Ithaca, New York.  Bar-tailed Godwit ML 131254 recorded by M. Andersen.
BirdNote’s theme was composed and played by Nancy Rumbel and John Kessler.
© 2021 BirdNote      Narrator: Ariana Remmel 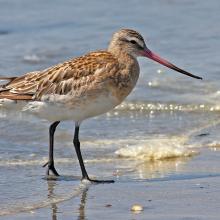 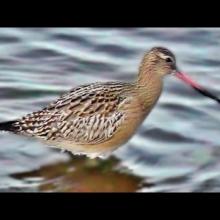