In honor of Abe Lincoln's birthday 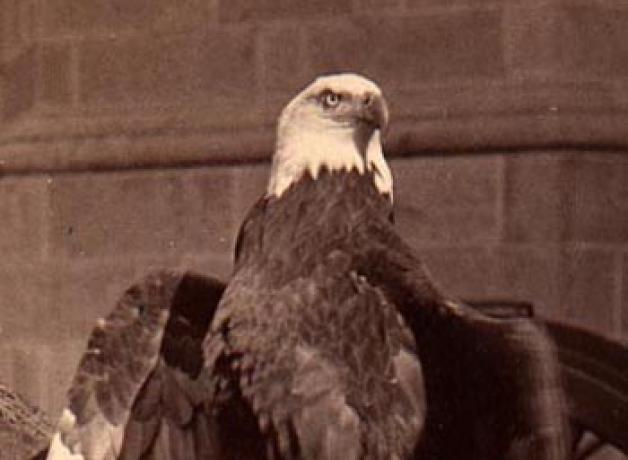 Abe Lincoln's Birthday! An infantry regiment from Wisconsin had a Bald Eagle as its mascot during the Civil War. Named "Old Abe", in honor of President Abraham Lincoln, this eagle accompanied Company C in nearly 40 battles. After the Civil War, Old Abe retired to the Wisconsin Capital, appearing in parades and visiting veterans' conventions. For more about Old Abe, visit the Wisconsin Electronic Reader.

If this sounds a bit melodramatic, it just might be. But a infantry regiment from Wisconsin actually had an eagle that accompanied it during the Civil War. Named “Old Abe”, in honor of President Abraham Lincoln, the eagle had been taken from its nest when it was four weeks old. After passing through several hands, the eagle finally settled into Company C of the 8th regiment from Eau Claire.

Old Abe accompanied the regiment in nearly 40 battles. Legend has it that, while the soldiers fought, Old Abe soared above, screaming louder and louder with the din of combat. It’s said that when his company won, Old Abe’s eyes glittered. But when they suffered defeat, his wings drooped in sorrow. [Eagle screaming]

After the war, the eagle retired to the Wisconsin Capital, where a replica of him stands today.

As we celebrate the anniversary of the Abraham Lincoln’s birth, we recall the cause forever memorialized in his words, “…that government of the people, by the people, for the people, shall not perish from the earth." [Close with more Fanfare.]