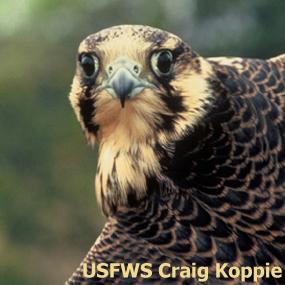 One bird of prey may steal another's meal, a behavior that biologists call piracy, or kleptoparasitism. The prey may change hands several times, perhaps from Northern Harrier to Peregrine Falcon to Bald Eagle. The Peregrine - like the young one seen here - may steal a meal, or have its meal stolen, or both! Visit your local Audubon chapter, to see where you might watch raptors this winter.

This is BirdNote! [Whistled calls of a Northern Harrier]

It’s early morning, and the winter sunrise bathes the horizon in pink. A Northern Harrier – a lanky, low-flying hawk – systematically covers a broad expanse of open ground. The harrier flies slowly on canted wings, hunting just a few feet above the grass-covered earth. [Call of a Northern Harrier] With a sudden, mid-air twist, it slams its talons toward the ground, catching an unwary rodent.

Just as the Northern Harrier lowers its head to partake of its quarry, a swift Peregrine Falcon streaks in on long, angled wings, knocking the harrier off its still-warm prey.

By snatching the harrier’s first morning meal, the falcon saves itself the time and effort of foraging. Biologists call this behavior piracy, or kleptoparasitism.

It’s a scene repeated in many areas across North America where birds of prey congregate in winter. In truth, piracy is almost routine – as our Peregrine Falcon is about to find out. Because just as the falcon took from the harrier and is now about to dine, a massive Bald Eagle – which had watched the entire drama unfold – flies in from a nearby perch to relieve the falcon of its already-once-purloined prey. [Call of Bald Eagle]

The eagle had better eat quickly. Other eagles are watching. [Calls of two Bald Eagles]