Ahoy, Matey! September 19 is Talk Like a Pirate Day! 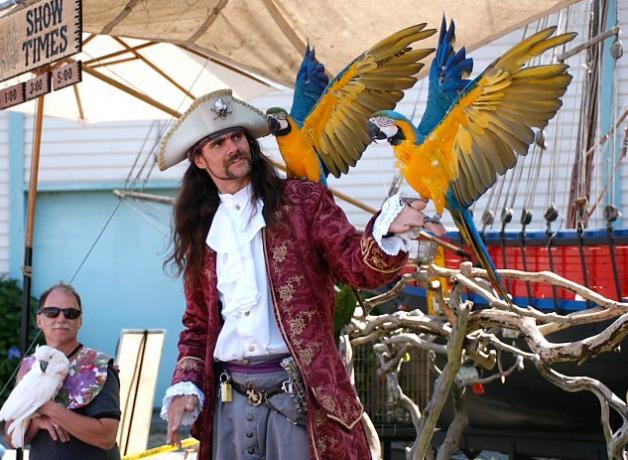 Ahoy, Mates! September 19th is Talk Like a Pirate Day. No doubt the most famous image of a pirate with a parrot is Long John Silver in Treasure Island. During the 1700s, pirates plied the waters of South and Central America, home to many species of parrots, including this Blue and Yellow Macaw.

Today's show's music by the Toucan Pirates. Thanks!

Pirates and Parrots
--For September 19, International Talk Like a Pirate Day!

This be BirdNote!
[Music from Toucan Pirates]
Ahoy, Maties! It’s International Talk Like a Pirate Day.
And what’s a pirate without his parrot?
Although we can’t be certain that pirates were especially likely to have parrots, the stories abound. [Yellow-crowned Amazon squawk, Nick Athanas]
During the “Golden Age of Piracy,” Europeans were busy exploring the New World. And pirates preyed on the ships plying the waters of South and Central America, home to many species of parrots. Pirates could have easily traded – or raided – for parrots. [Calls of Yellow-crowned Amazon flock, Sjoerd Mayer] A parrot would be a good companion on a ship — it’s small and tidy and makes a wonderful burglar alarm when someone sneaks into your cabin to steal your booty. Arrhhhh. [Amazon Squawk, Nick Athanas]
No doubt the most famous image of pirate and parrot is Long John Silver in Treasure Island. Long John’s parrot, Cap’n Flint — most likely a Yellow-crowned Amazon — went everywhere with him, and he had much to say. [Amazon Squawks, Nick Athanas]
So, avast there, me hearties! Join us in celebrating Talk Like a Pirate Day, even if ye don't have a parrot. For BirdNote, I’m Captain Buckthorn Cruikshank. Ahoy, Maties. Arrrhhhh.
[Music from Toucan Pirates]
###
Scarlet Macaw audio provided by The Macaulay Library of Natural Sounds at the Cornell Lab of Ornithology, Ithaca, New York. Recorded by L.F. Kibler and T.A. Parker III.
From Xeno-Canto.org: http://www.xeno-canto.org/species.php?query=sp:933.00
Yellow-crowned Parrot call, Amazona ochrocephala ochrocephala
Nick Athanas XC12092; 19-01-2006, Brazil
Yellow-crowned Parrot Calls in flight, Amazona ochrocephala
Sjoerd Mayer XC2407; 30-03-1994, Bolivia
Music by Toucan Pirates: “Battle Songs of the Toucan Pirates”, 1998.  www.toucans.net
Producer: John Kessler
Executive Producer: Chris Peterson
© 2014 Tune In to Nature.org     September 2016     Narrator: Michael Stein

The Toucan Pirates and their music 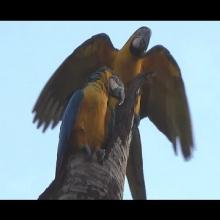