Pterosaurs were reptiles, not dinosaurs 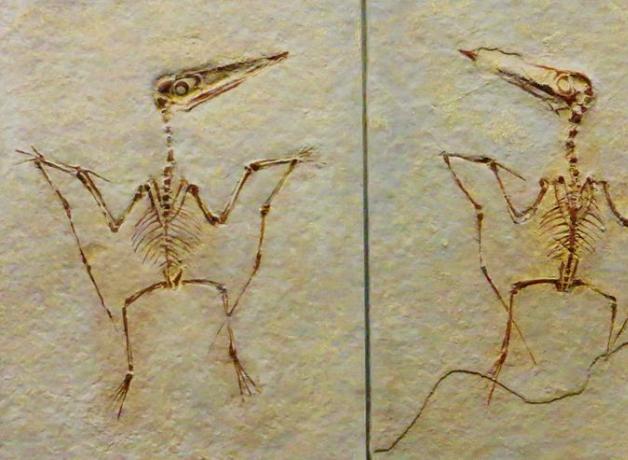 Pterosaurs—the giant, leathery flying creatures of the age of the dinosaurs—were giant reptiles, NOT dinosaurs. The pterosaurs had slim bodies and thin-walled, lightweight bones, ideal for flying. They thrived for 160 million years, passing into history after the same asteroid strike that finished off the large dinosaurs. Today’s birds are modern-day dinosaurs, descended from creatures similar to the terrifying T-Rex.

Imagine a scene from the age of dinosaurs — giant ferns, prehistoric bugs, a fearsome T-Rex standing right in front of you.

And gliding just above are strange, leathery flying creatures. Were they dinosaurs? Did they give rise to birds?

The answer to both questions is “no”. The flying creatures were pterosaurs. Pterosaurs—often called pterodactyls—were flying reptiles. Dinosaurs, which used to be thought of as giant reptiles, were an entirely different group of creatures. It was the dinosaurs that became the creatures that we now know as birds.

Pterosaurs came in all sizes. From a tiny one with a 10-inch wingspan, to a monster with a 36-foot wingspan.

Pterosaurs thrived for 160 million years, passing into history after the same asteroid strike that finished off the large dinosaurs.

Although the evolutionary path from dinosaurs to modern day birds is still a subject of debate, scientists agree that birds are the only type of dinosaur living today.

And even though you might hear someone compare a Great Blue Heron to a pterodactyl, that heron is actually more closely related to that scary T-Rex.