Synchronized swimming keeps the flock together! 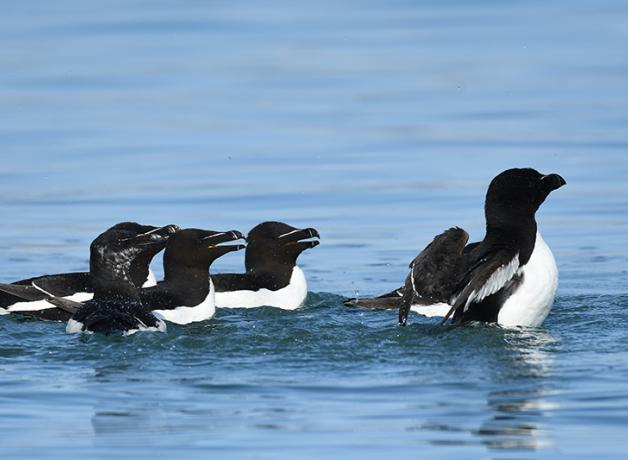 Razorbills, a cousin to the puffin, nest in colonies on cliffs. Before they lay eggs, Razorbills take part in two unique social behaviors. In one, the Razorbills swim round and round in a tight mass, then dive as one. Next, they surface with heads aligned and bills held open. In another behavior, dozens of birds swim in a line, then zig-zag in a synchronized pattern across the ocean’s surface.

The Razorbill is a black seabird with white underparts and black head. Its dark bill, crisply marked in white, has a blunt, rounded tip. It stands a head taller than its cousin, the Atlantic Puffin.

Razorbills nest in colonies, principally on the coast of Iceland, in crevices among boulders. To feed, they make wing-propelled dives to hunt small fish, sometimes reaching depths below 300 feet.

Pairs usually mate for life. But perhaps the most remarkable thing about Razorbills is their synchronized swimming.

Before they lay eggs in summer, they take part in two different group social behaviors. In one, the Razorbills swim round and round in a tight mass, then dive as one. Next, they all surface together with heads aligned and stretched upward, with their bills held open.

In a second group behavior, dozens of birds swim in a line, then zig-zag together in a synchronized pattern across the ocean’s surface.

For Razorbills, which breed and hunt for food in groups, these carefully coordinated movements are how they get in sync.

Razorbill - More at All About Birds