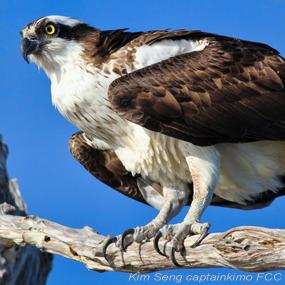 This Osprey looks similar to other birds of prey. But the species is truly unique among raptors. For example, the Osprey is the only raptor with oily feathers. And the Osprey’s long, slender, arched wings help it clear the water as it takes flight after catching a fish. The Osprey we see today — just one species worldwide — has changed little since tens of millions of years ago, suggesting that over this period, it has remained particularly well suited to its environment.

To the untrained eye, the Osprey looks just like a bird of prey should. Talons, hooked beak, vivid yellow eyes. But it also has some characteristics that make it truly unique among raptors. Especially when catching fish.  [Osprey call, http://macaulaylibrary.org/audio/106651]

In common with most raptors, it has four long toes — three in front and one in back. As the bird reaches for a fish, its outer front toe swivels to the rear, giving it two grasping talons front and back. And those toes are lined with short, stiff spikes for extra grip. The Osprey’s nostrils shut tight as it hits the water. Then as it ascends, it shakes itself off, shedding water easily thanks to its oily feathers. In fact, it’s the only raptor that has this oily plumage. Its long, slender, arched wings help the Osprey get clear of the water too, as it takes flight with the fish’s head facing the front — the most aerodynamically efficient position.

This Osprey we see today — just one species worldwide — has changed little since tens of millions of years ago, when its ancestors diverged onto a unique evolutionary track, distinct from eagles and hawks. Suggesting that over this period, it has remained particularly well suited to its environment. Thanks to these adaptations.