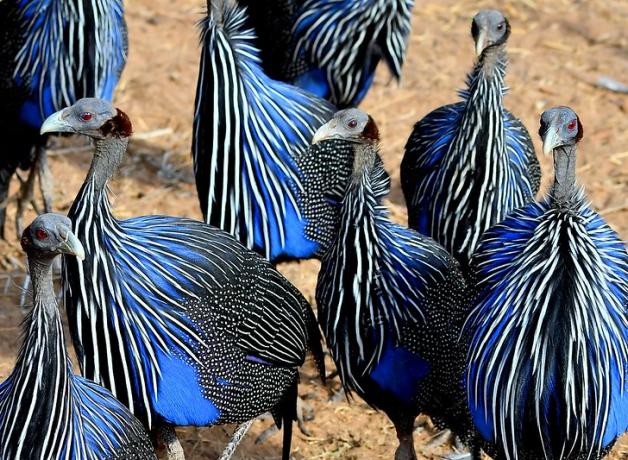 The Vulturine Guineafowl is a striking bird. It lacks feathers on its head and neck and has a blue breast with silvery plumes. The species has a complex social structure. Distinct groups, similar to high school cliques, mingle but don’t change membership. Such a multilevel society was previously only known in large-brained mammals such as primates, dolphins, and elephants.

The Vulturine Guineafowl is a preposterous looking bird. It stands two feet tall, with a cobalt-blue breast draped with silvery plumes. And the “vulturine”? That’s because its head and neck are bare, like those of a vulture. The birds inhabit dry areas with tall grass and thorn bushes in Sub-Saharan Africa.

What intrigues scientists about Vulturine Guineafowl is that they form multilevel societies. They live in distinct groups — a bit like high school cliques. Membership doesn’t change, although they may temporarily mingle with other specific groups. And these groups aren’t territorial or aggressive toward each other.

Multiple groups may come together to roost at night — a supergroup. But in the morning, they divide into their regular cliques. Other supergroups form at daytime feeding areas, helping them watch for predators. To get back with their own squad, guineafowl are able to track which individuals belong to their group and which to other groups.

Previously, multilevel societies were known only among large-brained mammals, like primates, dolphins, and elephants.

What is it about Vulturine Guineafowl that has led to the evolution of this social system that resembles that of primates?

Vulturine Guineafowl: More at Birds of the World