What in the World Is a Hoopoe? 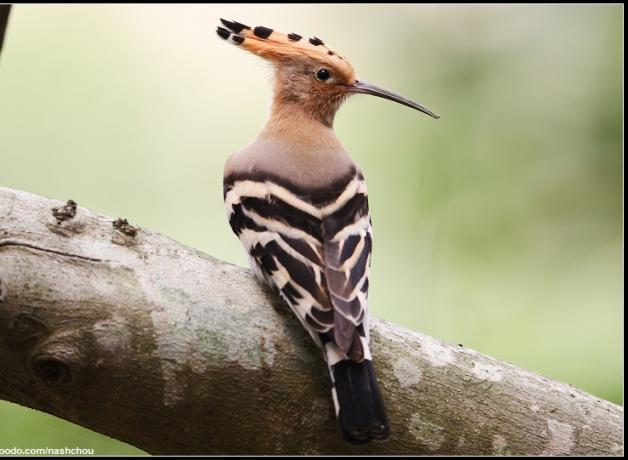 The soft, modest hoots of the Hoopoe signal a bird so distinctive and fabled that it’s hard to know where to begin this story. Hoopoes are the only existing members of a unique family of birds: Upupidae. They fly on rounded, zebra-striped wings, fluttering unevenly like a giant butterfly. The Hoopoe figures in mythologies of Arabic, Greek, Persian, Egyptian, and other cultures. In Jewish tradition, a Hoopoe led King Solomon to meet the Queen of Sheba, which may help explain why in 2008, the Hoopoe won a popular vote to become the national bird of Israel.

What in the World Is a Hoopoe?

These soft, modest hoots signal a bird so distinctive, so fabled, that it is hard to know where to begin its story. So, let's start with the bird's name, Hoopoe [pronounced HOO-poo] — or Hoopo — modeled on its song. [Hoopoe song http://macaulaylibrary.org/audio/6665, 0.44-.48]

Its scientific title, too, comes from those mellow hoots: Upupa epops.

Hoopoes are also the only extant members of a unique family of birds: Upupidae [pr: oo-POO-puh-dee] And it's a crazy looking bird: jay-sized, with a long bill like a sandpiper’s. The Hoopoe's head and breast are buffy pink, with a crest it can raise like an Indian headdress. It flies on rounded, boldly zebra-striped wings, fluttering unevenly like a giant butterfly.

It’s a bird so peculiar — and found through much of the Old World — that it’s caught the eye of humans for eons. The Hoopoe figures in mythologies of Arabic, Greek, Persian, Egyptian, and other cultures. But the bird's fame hasn't gone to its head. In all its oddity, the humble Hoopoe carries on with a minimum of fuss — nesting in tree cavities in Europe and Asia, migrating to the warmth of Africa in winter. [Hoopoe song http://macaulaylibrary.org/audio/6665, 0.44-.48] 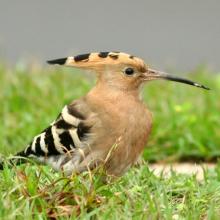 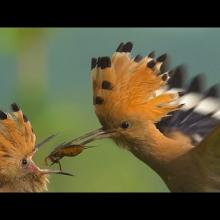