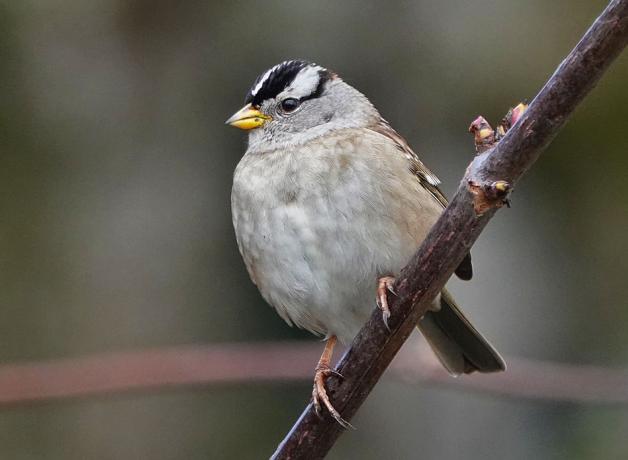 The White-crowned Sparrow pours out its song over and over on spring and summer days-and even on moonlit nights-often up to 15 times a minute. Now here's a curious thing: Just as people in different regions may have different dialects, White-crowns have different songs, according to where they live. Find more at the Macaulay Library.

This page is sponsored by Hope Kanaley
in honor of mentors Sylvia Gallagher and Roy Poucher.
Thanks for supporting the new BirdNote.org!

Adapted from a Script by Frances Wood

[“See me, pretty, pretty me” song of the White-crowned Sparrow]

This is the song of a White-crowned Sparrow. Some describe it as “See me, pretty, pretty me-e.”

The White-crowned Sparrow pours out its song over and over on spring and summer days—and even on moonlit nights. The buzzy song seems to float on the air in much of the western United States.

At first, you might think this sparrow is just another “little brown bird.” But the elegant black-and-white stripes on its head make this bird stand out.

Quite a difference, don’tcha think? Once more—one [Washington State song], and now the other [Oregon song].

Regional dialects arise because young White-crowned Sparrows may learn their songs from birds other than their parents. Slight variations get copied, until all the birds in that territory are singing the new version of the song. It's like the old game of telephone. The song changes bit by bit, as it moves along.