Winter on the Columbia 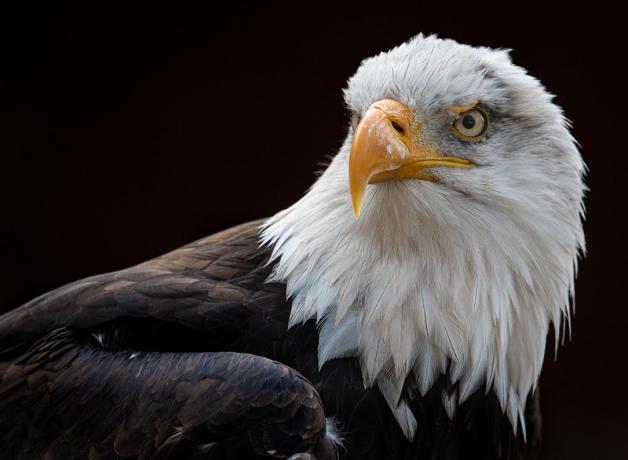 A stiff December breeze blowing down the Columbia River delivers an exhilarating chill. A stretch of river near Bridgeport, in north-central Washington, is held tightly by a series of dams, creating massive lakes - lakes which, in winter, harbor thousands of water-birds. High on an overlook, a Bald Eagle watches a flock of birds - coots, ducks, and more - on the water below. Be sure to watch the PBS Nature video of an eagle hunting on the Upper Mississippi River (see below).

Winter on the Columbia

This is BirdNote.
A stiff December breeze blowing down the Columbia River delivers an exhilarating chill. [Sound of a brief gust of wind] Here we are on a stretch of river in north-central Washington. The river is held by a series of dams, creating in effect a series of massive lakes. These lakes, in winter, harbor thousands of water-birds.
[Mixed sounds of quacking dabblers and grunting coots]
As we watch from a high overlook, a Bald Eagle cries from a nearby snag. [Bald Eagle’s cry] On the river below, a large and nearly circular mass of black dots pulses with movement, a teeming assemblage of thousands or more American Coots. And the river is dotted with loons, grebes, and diving ducks like goldeneyes, as well as flocks of geese and Mallards – and more coots. An eagle’s banquet, to be sure.
Here comes the eagle! It drops from its riverside perch, flying with deep, driving strokes toward the coots. The armada of coots quickly fragments, some diving, others skittering across the water, as the eagle swoops downward, talons outstretched.
A winter scene repeated many times daily.
[Repeat eagle’s cry]
You can find out more about the birds of winter on our website, BirdNote.org.
Today’s show brought to you by Forterra, saving the places that are keystones of a sustainable future in the Pacific Northwest.