Alex Chadwick has been in Southwest Texas for BirdNote. He found graceful nighthawks, stealthy roadrunners, and beautiful hummingbirds. And of course, the vultures...

NE: I had walked since dawn and lay down to rest on a bare hillside
Above the ocean. I saw through half-shut eyelids a vulture wheeling high up in heaven,
And presently it passed again, but lower and nearer, its orbit narrowing,
I understood then
That I was under inspection.

AC: Unloved birds, vultures, and I wonder if it’s because the name suggests it derives from vulgar, how we’d describe much of their behavior. Actually, vulture is thought to come from the Latin word vellere, to pluck or tear, a good description of a feeding vulture.

In the sky, they are aerial acrobats…big black wings held in a V-shape to catch thermal currents and glide.  Some open their tip feathers and swoop up. They seem to wobble a little from side to side…and soar on. Texans know them.

KB: Y'ought to see them come in when migration starts. And they come in in these huge kettles up the Rio Grande. To all points north.

AC: Kettle…a word for a group of vultures in flight. On the ground, they are called a committee, or a volt, or a venue, unless they’re eating: that’s a wake of vultures. There are new world vultures and old world vultures; they inhabit every continent except Australia and Antarctica. They fill the branches of trees - and hold their wings open to the sun.

AC: Vultures are scavengers. They often fly low, smelling for death, which they eat. Turkey Vultures are exquisitely sensitive to the scent of decaying flesh… a few parts per billion of air volume, and they’ll find it, a skill that enables them to hunt above forest canopy.

JC: It’s neat when they eat a snake. You'll see a dead snake, then a couple hours later, see just the skeleton and the rattler. But everything else picked clean.

AC: Vultures have powerful digestive acids to neutralize the dangerous bacteria in carcasses. And here's some advice. Keep a distance from these birds, and be careful if you catch a vulture when trying to net hawks. Another Texas story.

MF: I had trapped a Turkey Vulture, so I had to go down and open up the bow net and untangle this now very upset Turkey Vulture. [Chuckles] And that's how I learned about Turkey Vulture puke, because he just flipped on his back and he started hissing. It's like, well, I got to get him out. And he just let loose.

NE: …how beautiful he looked, veering
away in the sea-light over the precipice. I tell you solemnly
That I was sorry to have disappointed him. To be eaten
by that beak and become part of him, to share
those wings and those eyes--
What a sublime end of one's body, what an enskyment;
what a life after death.

AC: Vulture, written by Robinson Jeffers, and read here by Neenah Ellis. We also heard from Kelly Bryan, Carolyn Ohl, Mark Flippo, and Joey Cain, a waiter in a restaurant where we ate. Another vulture attribute…just about anyone will share a vulture story.

For BirdNote, this is Alex Chadwick from Big Bend National Park in Southwest Texas. 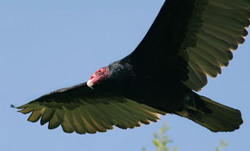 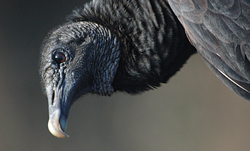 Strange Doin's
Because they have no syrinx, vultures mostly hiss or grunt.
Many cultures revere vultures. Some offer their dead in a "sky burial," and the vultures are thought to free the soul from the body.
A vulture cools itself and disinfects its legs by urinating on them.
When threatened, vultures may use projectile vomit as a defense. Vultures are now playing a part in forensic crime research. 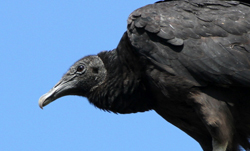 New World vultures – including Black and Turkey Vultures and California and Andean Condors – aren't closely related to the vultures of the Old World.

Some type of vulture is found on every continent except Antarctica and Australia.

Learn more about Turkey Vultures on Cornell's All About Birds.
And here's more about Black Vultures. 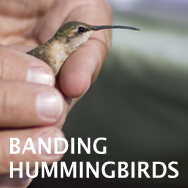 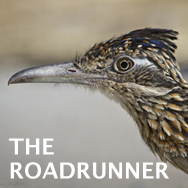 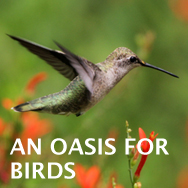 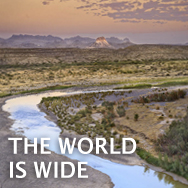