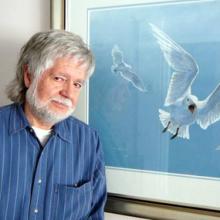 As a naturalist, Barry Kent MacKay has participated in numerous activities related to bird and nature study and conservation. As a fast-sketch artist, he promoted interest in wildlife during 16 years of appearances on a nationally syndicated children’s television show. He did field work for the Royal Ontario Museum and for the Western Foundation of Vertebrate Zoology in Costa Rica; illustrated the reptiles and amphibians of the Toronto Zoo; illustrated a few scientific papers in various technical journals; and participated in a search for the critically endangered, possibly extinct, Eskimo Curlew in historic migration sites in northern Newfoundland and Labrador.

As a writer, he is well known and respected for his Nature Trail column, published weekly in TheToronto Star for 25 years. His writings and articles have also appeared in numerous magazines such as Birds of the Wild, Defenders, BirdWatchers’ Digest, Seasons, Mainstream, and Animal Issues, and as features in The Toronto Star and various other publications, large and small.

In 1968, the Book Society published Eighty More Land Birds to Know, written and illustrated by a youthful Barry Kent MacKay. “I try to forget that one,” laughs Barry, but he is pleased to admit that one of his proudest moments came when his mentor, Roger Tory Peterson, chose one of his oil paintings of Ruddy Turnstones as an illustration for The Audubon Society Baby Elephant Folio, Audubon’s Birds of America, by Roger Tory Peterson and Virginia Marie Peterson, Abbeville Press, 1981.