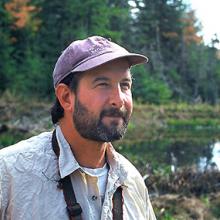 A writer and field biologist, Bryan explores the wild places where people and nature converge. His essays have appeared in The New York Times, Aeon Magazine, Orion, Northern Woodlands, Field & Stream, and elsewhere. When he’s not chasing nature, Bryan teaches writing to graduate students in the natural sciences at the University of Vermont. Otherwise, Bryan has been (or still is) a bread baker, a firefighter, a nature guide, a videographer, a beat reporter, and a consulting biologist chasing birds and insects for municipalities, nonprofits, and private landowners.

He is now at work on two books: a collection of essays called FLIGHT: A Year With Airborne Animals and PANTALA: What a Dragonfly Tells Us About Sex, Evolution and the Human Condition. Find Bryan among friends at the diner in Montpelier, Vermont, or online at www.bryanpfeiffer.com.

Browse shows that Bryan has contributed to.