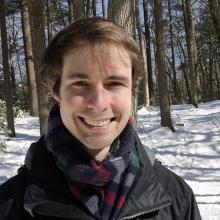 Conor Gearin is the Managing Producer of BirdNote Daily. He writes, edits and produces shows for the daily radio program and podcast, and supports the production of BirdNote's longform podcasts. His work has appeared in The Best American Science and Nature Writing 2019, The Atlantic, UnDark, The Millions, The New Territory, New Scientist and elsewhere. He received an S.M. in Science Writing at the Massachusetts Institute of Technology and an M.S. in Biology at the University of Nebraska Omaha, where he completed thesis research on grassland bird conservation. Raised in St. Louis, he developed an interest in the native songbirds of the Midwest, which led to a career focused on studying birds and exploring ways that people and wildlife can live together sustainably. He now lives in Rhode Island.

Browse shows that Conor has contributed to.