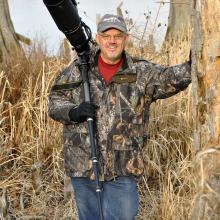 Dave Hawkins has won national and international awards for commercial photography. Originally from Los Angeles, he is now based in Nashville.  Dave began photographing birds in 2008, when his wife, Laurie, took him on his first birding trip. The first time he saw a Black-and-white Warbler, he was hooked.  The prospect of catching songbirds as they dart around proved to be a challenge that has captured him totally.