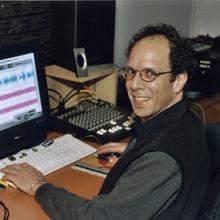 Producer
John was musical director of the acclaimed Mountain Stage radio show for 14 years. After years as a traveling bass-player, John settled in the Shoreline neighborhood of Seattle with his wife, a glass artist, and their cat and dog. He has produced dozens of CDs, from jazz to punk to opera, and he also plays with the Dudley Taft band. John's sense of musicality, pacing, and rhythm bring a magical sound to BirdNote.

John was responsible for bringing SoundScapes to KPLU (now KNKX), and is the lead programmer and host for the KNKX All Blues program.

Browse shows that John has contributed to.