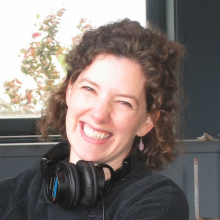 Sasha Aslanian is a documentary producer for American Public Media. She usually records human subjects and as a near-sighted, late sleeper, wasn't much of a candidate for bird watching. After years of admiring her neighbor Monica Bryand's bird photography, she finally got up early to accompany Monica to a wildlife sanctuary and was amazed to hear what she'd been missing out on.

Browse shows that Sasha has contributed to.