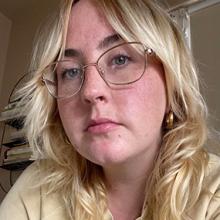 Zoie Matthew is an L.A.-based journalist who covers the environment, housing, and grassroots organizing. Her writing has appeared in LAist, Los Angeles magazine, Curbed, The Cut, and more. A graduate of the University of California, Irvine, her musings about Los Angeles, literature, baking, and birds can be found on her twitter.

Browse shows that Zoie has contributed to.