We received an interesting story from BirdNote listener, JoLee Wingerson, in Boulder, Colorado. She wrote about the rescue and rehabilitation of a Ring-billed Gull, nicknamed "CeCe." Read more:

On Saturday, July 20, at a reservoir in Boulder, Colorado, a number of people approached an adult gull that sat unmoving on the shore, as they stood very near. He seemed vulnerable and ill. By early afternoon, Greenwood Wildlife Rehabilitation Center near Lyons, Colorado, had received five calls about the gull, however they had no one available to rescue him.

Boulder Parks Department was able to respond to the request for help and sent someone to pick up and transport the bird to Alpenglow, an emergency veterinary hospital, where he spent the night.

The following day the lethargic gull arrived at Greenwood Wildlife Center, one of only a small handful of professional wildlife rehabilitation centers in Colorado that care for waterbirds.

The center’s medical team was initially so concerned with the gull’s condition that they weren’t sure he would make it. In addition to being malnourished and dehydrated, he was unable to walk and had been dragging his wings. They thought he might have spinal trauma or West Nile Virus.

To help the gull relax, they moved hm to the waterfowl ICU area and placed him inside one of seven 3’ x 3’ x 3’ enclosures built of wood and heavy screen. His neighbors included a Canada Goose and about two dozen Mallard ducklings. Blue waterproof drapery, donated by local hospitals, lined the inside of each enclosure to shield the birds’ views of people and of other bird species. Because the gull needed to recuperate alone, a mirror was placed in his new home. “We often use mirrors for geese, gulls, and ducks,” said Lea Peshock, animal care supervisor and one of 11 licensed wildlife rehabilitators at Greenwood. “They see their reflection and think there’s somebody else in there with them. It’s comforting.“

It's standard practice at Greenwood for staff to avoid unnecessary contact with the wild animals so they don’t become habituated to people. This is for their safety once they are released back into the wild.

Still, all animals at Greenwood receive a name. “We decided to name him CeCe because everyone kept calling him a ‘sea’ gull,” said Jenny Bryant, volunteer and outreach manager. He’s actually a Ring-billed Gull – a black ring circles the tip of his bright yellow beak – and one of the most common inland gulls in the US.

All gulls love water. Though CeCe had a small tub of water in his enclosure, he was also able to spend at least three hours a day in a deep, bathtub-like pool with two shower curtains, one clear to keep him inside and one opaque for privacy. There he swam or perched on a small floating, netted island. Above, an ultraviolet lamp provided light similar to natural sunrays. 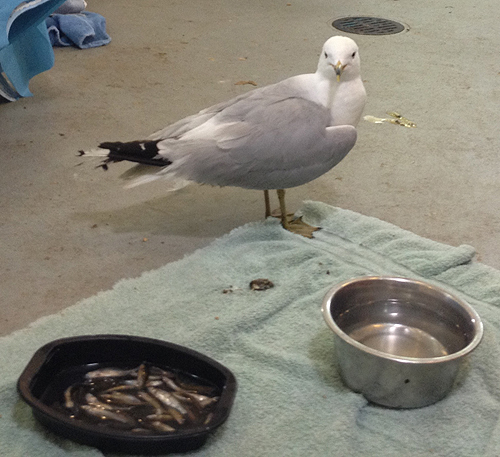 Much to everyone’s relief, within a couple of days CeCe was eating fresh and frozen minnows on his own. His emaciated body began to fill out. The possibility of CeCe carrying West Nile Virus had been ruled out, because his feathers didn’t develop the pattern of colored bars common on birds with the virus. He preened his feathers. He walked normally. (If waterbirds walk too much on smooth surfaces, they develop sores called bumblefoot. To avoid this issue, the flooring of the enclosure is a mixture of uneven surfaces including logs covered with recycled bicycle tires, rubber anti-fatigue mats, and stones covered with green shag astroturf.)

After being at the wildlife center for 10 days, CeCe was gaining strength and flapping his wings. He was moved to a much larger outdoor enclosure where his spinal condition would be tested as he attempted to fly. Although a Ring-billed Gull's body is only about 16 inches long, its wingspan can easily reach four feet. Soon CeCe was flying effortlessly. All that remained was for him to prove he was able to feed himself.

After 16 days at Greenwood, on Tuesday, August 5, CeCe was placed in a plastic carrier with screens on the lid and holes in the sides. Lea loaded him into her car. She and Jenny were about to drive to the Boulder Reservoir to release him, when Lea noticed a heavy rain moving in over the foothills. She reconsidered the timing of his return to the wild for a few moments. Then she said, “It’s too stressful for him to try to acclimate to being outdoors in this weather. We’ll wait until tomorrow.”

The following morning was a clear day. Lea, Jenny, and Dane arrived at the reservoir with CeCe. They looked out over the southwestern edge of the large body of water, which had been returned to natural wetlands. White Pelicans, Great Blue Herons, ducks, geese, and gulls all now call this area home.

“They’ve put up perches so some of the birds can nest up high,” Lea said. “They’ve also closed off a lot of the area and created a wetland habitat to help the birds come back. Oh look, there’s a group of gulls over there.” She pointed east of where they planned to release CeCe.

Lea carried the crate to the end of a long dock. As the lid was lifted, the alert gull hopped out. Instead of flying away, he just stood on the dock near everyone. Jenny was videoing him while a by-stander took photos.

Dane said to CeCe, “I’m going to shoo you off here in a second, buddy.” Then, he gently urged the gull off the dock.

CeCe casually flew toward shore and landed on the other end of the dock. He looked around before hopping down to drink some water. When a woman with a camera approached him from the shore, CeCe finally took off flying, his enormous grey wings with black tips lifting him gracefully higher and higher. He headed east toward the group of gulls and disappeared above the trees.

“He obviously knows where he is,” Lea said. “We always try to release adults back to their original habitat. And it’s better to release him now before the weekend when there are fewer people around the lake, fewer boats.”

As Lea, Jenny, and Dane walked back to the car, Lea turned to Dane and asked, “Who else are we going to release today?”

Sent to BirdNote by JoLee Wingerson.

Greenwood Wildlife Center rehabilitates sick, injured, and orphaned wild animals for release into appropriate habitats. Greenwood’s dedicated employees, interns, and volunteers treat more than 2,300 animals in a year, on average, including about 1,200 birds. The organization recently celebrated its 30th anniversary. 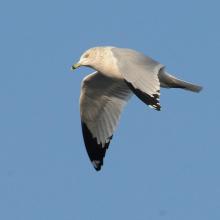