“Bird-Lore: A Bi-Monthly Magazine Devoted to the Study and Protection of Birds”

Official Organ of the Audubon Societies

From the author, Lucy W. Maynard of Washington, DC: … I had the opportunity to speak with the President, and I asked him if I might make, from a magazine article of his, a list of the birds he mentioned having seen about the White House. I explained that I wanted it for a new edition of the local bird book, ‘Birds of Washington and Vicinity.’ 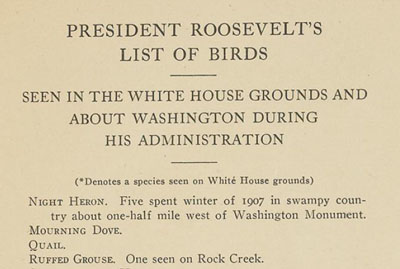 “Why yes,” he answered cordially. “But I’ll do better for you than that. I’ll make you a list of all the birds I can remember having seen since I have been here.”

Then he said I had better remind him, as he might forget it, and he told me how to address a note so that it would come directly to him, without risk of falling into a secretary’s waste-basket.

I wrote the reminder, and it shows the President’s characteristic promptness that within twenty-four hours after mailing it I received this list of ninety three birds in his own handwriting.

*SPARROW HAWK [American Kestrel]. A pair spent the last two winters on and around the White House grounds, feeding on the Sparrows—largely, thank Heaven, on the English Sparrows.

*WHITE-THROATED SPARROW. Sings; this year sang now and then all through the winter.

TANAGER [most likely Scarlet Tanager, but could be Summer Tanager].

WATER THRUSH [Could be Northern or Louisiana Waterthrush].

(Doubtless this list is incomplete; I have seen others that I have forgotten. -- Theodore Roosevelt)

See a copy of the original publicationListen to the BirdNote show "Theodore Roosevelt, Presidential Birder"