That's how many miles Dorian Anderson had biked when I met him on the coast of Washington State in late August. He'd averaged nearly 50 miles a day since he started from his home state of Massachusetts on the morning of January 1. The weather on his first day was freezing with a stiff wind –- not ideal for biking.

Or birding for that matter. 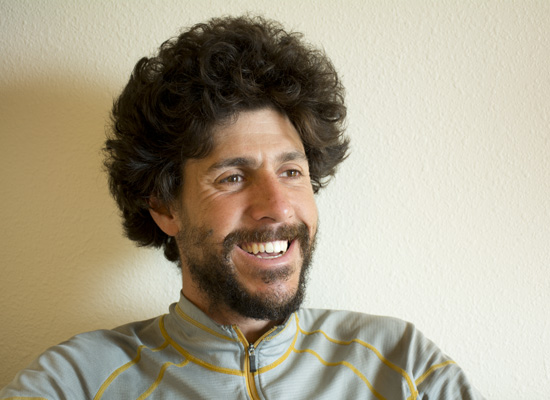 Dorian Anderson, the biking birder. Watch the video of our interview with Dorian. © Adam Sedgley

Dorian was setting out to do a Big Year - a competition to see as many bird species as possible in North America between January 1st and December 31st. The long-standing record had just been broken by Neil Hayward in 2013. Neil had flown nearly 200,000 miles (and driven another 50,000) to tally 747 species of birds from the Mexican border north to Alaska (which he visited on eight separate occasions).

Dorian's attempt, however, is different: it is entirely self propelled. Every mile is walked, paddled, or -- mostly -- pedaled. Eight months into his attempt, he'd already pedaled four times the driving distance between Los Angeles and New York, stopping long enough along the way to spot 540 species in 27 states [December 5 UPDATE: 28 states / 16,500 miles / 608 species]. The entire year, he's been in a car only twice, both times to eat lunch out of the weather. Assisted propulsion is so novel that he's actually kept track of how many times he's been in an elevator (also twice).

Watch the video of our interview with Dorian >>

Dorian is a smart guy. He has a PhD in developmental genetics and was a Harvard post-doc. So why would he endure the countless lonely hours out on the road, from the bitter cold of the Northeast winter to the oppressive heat of the Southwest in summer?

"I had a couple of different goals for the trip," Dorian said to me in his room at a Best Western, as we waited for the coastal rain to subside, "some numerically defined and some a bit more amorphous." 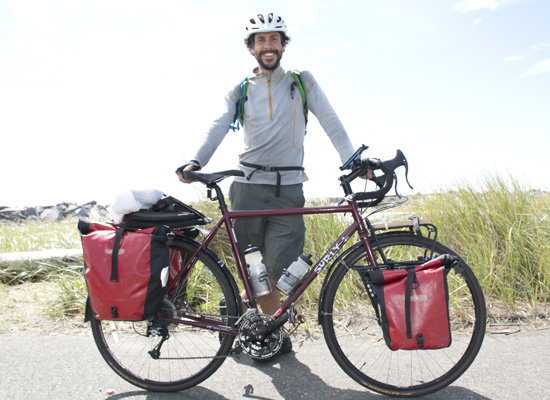 "This first goal is to see as many species as possible." He projects that he should be close to seeing 600 species by the end of the year. "I think I will probably fall right in between 595 and 600." (He is a scientist, after all.)

The second goal is to promote the bicycle as a practical alternative to the automobile. "I want people to think, 'Oooh, when I go to the store today, maybe I can ride my bike.' And I want to encourage cities to be bike friendly, to include bike lanes and commuting areas and bike racks ... And offices should include showers so people can bike to work. These are all things that I think this trip will highlight, for the bicycle as an alternative mode of transportation."

Lofty goals, considering that Dorian's longest bike ride before this year was 35 miles around Boston on a borrowed bike.

Dorian also wants to use this trip to raise money for bird conservation, his third goal. He's aiming for $100,000 and as of August, he'd raised a quarter of that. "I know that there will be a huge bump at the end of the year," he confided. "But I know that my biggest fundraising will actually come next year."

"Personally, the fourth goal is to just have an adventure, enjoy myself, and do something that up until now no one has done before, at least on this scale and at least by himself." 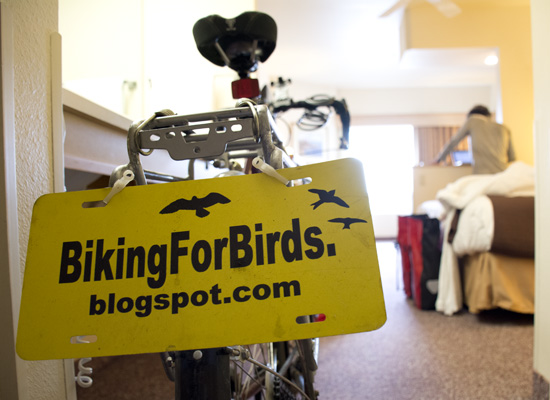 Getting ready in the morning © Adam Sedgley

He may be a lone biker, but Dorian has met many people along the way. At night, he usually stays in people's homes, reaching out to fellow birders or using the Warm Showers website to stay with other touring cyclists. Best Western - one of his corporate sponsors - has provided him with free lodging all year.

And staying with new people every night has provided some interesting stories. There was the animal hoarder who had nine dogs and eleven cats in a large two-bedroom apartment: "It was kinda like Noah’s Ark … I love animals but it was a bit stinky." He was texting with another potential homestay, and the host - a man - informed Dorian that he was an in-home nudist and "not only would he be nude during my stay but … so would I."

"At that stage, I decided that a motel was a very attractive option."

On the bike, Dorian has four waterproof bags, called panniers. So what does one take on a 365-day biking trip? About 85 pounds worth of stuff.

Twenty are birding specific: a spotting scope, a carbon fiber tripod, a DSLR camera with a 400mm lens, binoculars, and a field guide. A GoPro camera and a laptop help him share his adventure with his friends, family, and growing online fanbase. 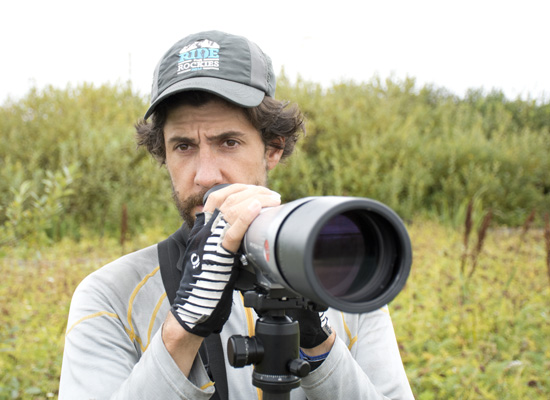 And the biking essentials? Tools for repairs, a knife, and spare tubes and tires.

Dorian is slender, as one might expect after a person has biked thousands of miles. "I have a metabolism that would be considered that of a hummingbird to start with. I don’t put on weight. I don’t drink caffeine because I am super wired all the time. This year has only accentuated my metabolism. There will be days where I will eat three Belgian waffles for breakfast, four hamburgers for lunch at McDonald's, a shake for a snack, a Snickers for a snack, and a whole Domino's large pizza for dinner."

He sheepishly admits to eating a lot of junk food on this trip: "It’s what’s there, it’s what’s convenient, it’s what I can afford ... I am not stacked with cash for this trip. I have a budget." 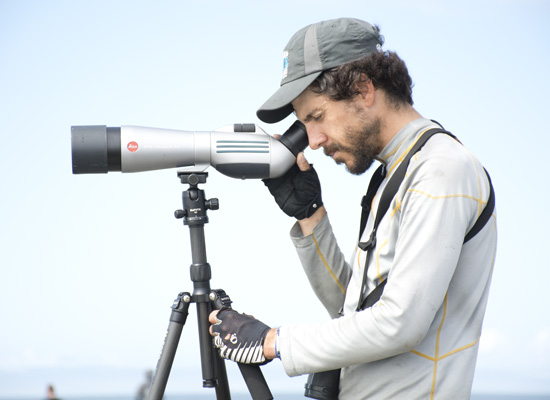 Scanning the Pacific Ocean for a Black-legged Kittiwake © Adam Sedgley

And he'll always make room for ice cream, admitting that there have been days where he's pulled into Dairy Queen more than once. "I have a big sweet tooth ... I try to hold sweets over my head at the end of the day so that I write my blog."

And write, he does. Every day. And with a third of a million pageviews, people are reading.

So after he'd spotted 540 species, spanning the color spectrum through all of the lower 48, what was his favorite bird of the trip?

Black-throated Blue Warbler, actually a very common species in the eastern half of the US. It winters in the Caribbean and migrates through South Florida to the Northeast and maritime Canada. Beautiful, for sure, but a surprising choice.

And why? "I was in South Florida and I heard what I thought was a Black-throated Blue Warbler, and I thought 'Oh, that’s a bird I will see in Texas' and I didn’t pay attention to it because thirty seconds later, I heard a La Sagra’s Flycatcher."

Now, La Sagra's Flycatcher is a rare bird that periodically shows up in southern Florida. This one was probably the only bird of its kind in the US at that time, so it was important for Dorian to see it. 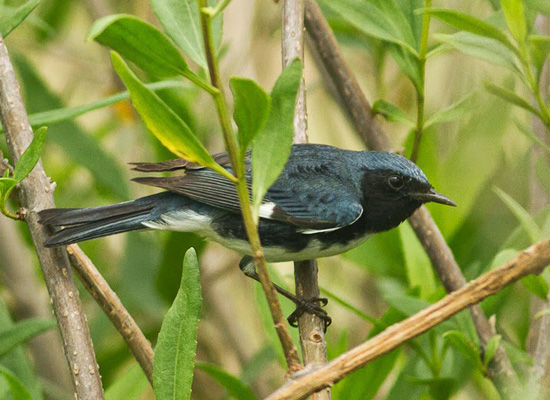 "About two or three weeks later, I realized, 'Oh my god, I let that Black-throated Blue Warbler go, and that bird doesn’t migrate through Texas.' It’s an eastern gulf migrant; it basically migrates northeast of New Orleans. And one day in Texas in Sabine Woods, I went out for a bike ride and I saw this odd-looking bird in a very short bush, and I thought 'there’s something wrong with that bird.' It was a male Black-throated Blue Warbler."

"That was like the first time on the trip where I put my bike down on the road ... and I was jumping around ... and I was fist pumping. It was really exciting because I had redeemed myself from my own stupid mistake. I photographed the bird (see left) and told all the other birders at Sabine Woods. That was probably one of only two or three that will be found in the state of Texas this year. That was really cool."

Our interview with Dorian:

Follow Dorian's blog to keep up with his stories.