The Northern Harrier is the only member of the genus, Circus, found in North America, where it occurs in all continental states and Canadian provinces. All the harriers are very similar structurally, being lean and long. They have long, rounded wings, long tails, and a characteristic “facial disk” consisting of short, stiff feathers radiating out from the eye, a little like the facial disks of owls. Most have a white patch on the rump, and they tend to soar low over open areas on wings held at a slight upward angle. 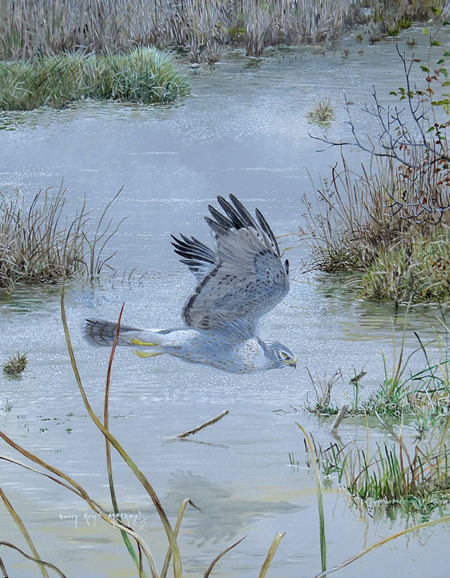 The Northern Harrier was formerly called the “marsh hawk.” It is a subspecies of the Hen Harrier of Eurasia, although the juvenal plumages, in particular, are quite different.

They nest on the ground, usually in fields or marshes, open prairies, or tundra, and the nest is well hidden amid surrounding vegetation. The male will mate with more than one female, usually two, but up to five.

The adult is similar in color to many gull species, being gray above and white below, with black wing-tips. There is a variable amount of warm buffy markings on the underparts. Females are brown, the immature birds a richer brown with a very rich, buffy, thinly or non-patterned belly. All three plumages show a crisp white rump patch.

Food varies, usually small mammals and birds, ducklings, snakes, and frogs, but sometimes they will take larger prey, such as an adult duck or muskrat.

The original painting is small and was designed for the cover of a magazine, leaving room above and below the central figure for print. It shows an adult male flying low over a marsh in south-central Ontario. It was done in acrylics, on compressed hardboard. 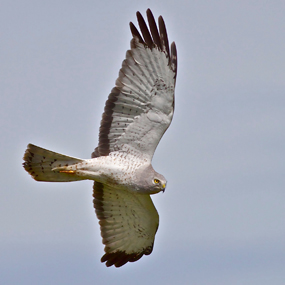