Bringing Birds Back to the Boreal Forest

The boreal forest is called “North America’s bird nursery” because nearly half of the species found in the U.S. and Canada nest there. It’s also a buffer against climate change. But the forest is under pressure. Many boreal birds are declining, while development and resource extraction are intensifying. If it’s to survive, partnerships between communities, businesses, and governments will be a vital part of the process. Learn how you can help #BringBirdsBack to the boreal forest in this special edition of BirdNote.

Support for this special edition of BirdNote comes from Green Century.

The exquisite songs of the White-throated Sparrow and Hermit Thrush evoke the boreal forest, a vast and pristine ecosystem of forests, wetlands, and rivers stretching from Alaska to Newfoundland. 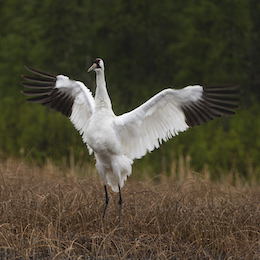 It’s called “North America’s bird nursery,” because nearly half of the species found in the U.S. and Canada nest there. Nearly three billion birds make their way to the boreal forest in spring and early summer, including the Rusty Blackbird, the Mew Gull, and the endangered Whooping Crane. Still more species of birds stop in the boreal to rest and feed before continuing even farther north. Birds like Hudsonian Godwits and Lesser Yellowlegs.

During spring and summer, the boreal forest is home to familiar backyard birds such as Dark-eyed Juncos and Northern Flickers, along with Blackpoll Warblers that winter across the Caribbean into South America. At the end of the breeding season, as many as five billion birds head south from the boreal.

Some birds are especially reliant on the boreal forest. Three-quarters of all Common Loons breed in the boreal. And 95% of Bonaparte’s Gulls!

The boreal forest is also a buffer against climate change. On average, boreal forests store twice as much carbon per acre as tropical forests. Keeping this carbon stored in the ground and out of the atmosphere is one of the most important and easiest ways we can prevent climate change from getting worse.

Canada’s boreal forest also serves as a refuge for birds and other wildlife moving north in search of suitable habitat as landscapes change. But the forest is under pressure. 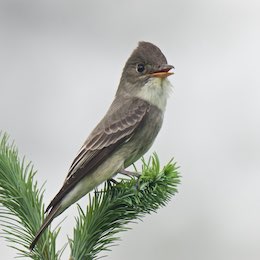 Many boreal birds, including Olive-sided Flycatchers and Connecticut Warblers, are declining, while resource extraction and development are intensifying. According to the Boreal Songbird Initiative, oil and gas, timber, mining, and hydroelectric development arepushing northward at increasing rates. Roads reach farther into the heart of the boreal each year to make those resources accessible. If it’s to survive, partnerships between communities, businesses, and governments will be a vital part of the process.

Fortunately, Indigenous Nations are moving to protect boreal forest lands on a sweeping scale. In 2019, the Lutsel K’e Dene First Nation worked with the Canadian government to create one of the largest protected areas in the country. The Sahtu Dene  have plans to conserve an area 12 times the size of Yellowstone. And the Sayisi Dene want to preserve more than 12 million acres—habitat for millions of nesting landbirds and tens of thousands of migrating waterfowl.

Nearly two-thirds of all forest products from Canada's boreal forest go to the United States, but you can help boreal birds by making thoughtful choices.

Learn more in the Related Resources below. Together, we can #BringBirdsBack.

If you’d like to hear longer BirdNote stories that connect us more deeply with birds, nature, and one another, subscribe to BirdNote Presents. Our next series, about the Greater Sage-Grouse, follows a city-slicker journalist who moves to sagebrush country in search of the troubled bird that’s dividing the West. Subscribe to BirdNote Presents today and watch for the first episode of Grouse on Sept. 15.

Listen to BirdNote Shows About the Boreal Forest: