Bird Size Can Be Deceptive 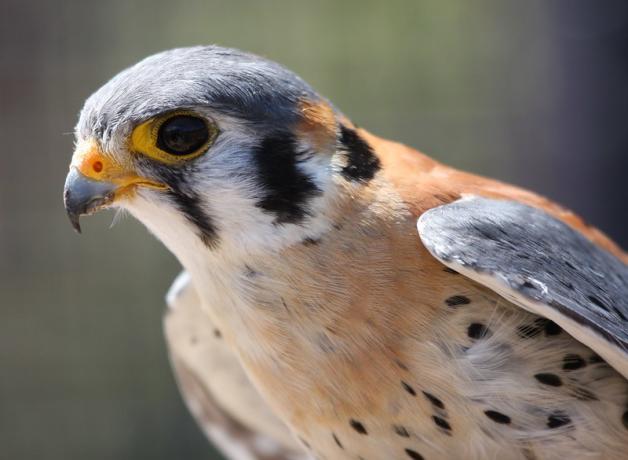 When I see an American Kestrel on a telephone wire, scanning the surroundings for its lunch, my mind does funny things with the bird’s size. Especially when it’s silhouetted against a bright sky, the bird’s falcon-shaped features look large and imposing. But when the kestrel swoops down from its perch, I’m able to compare its scale to other nearby objects — a maple leaf, a flyer on the telephone pole — and recognize it’s not nearly as big as it had seemed up there against the sky. And it may be swooping for prey as little as a grasshopper or a moth.

Kestrels are a good example of why our perception of a bird’s size is only one clue we should use when identifying a bird, and that size perception can be misleading. The Merlin Bird ID app begins with choosing the relative size of the bird you saw: was it between a robin and a sparrow, or was it bigger than a crow? These rough comparisons are crucial to narrowing down the list of possible species, but it’s often as far as you can go with size alone.

Only when I held an American Kestrel in my hand (a rehabilitated, captive kestrel at a wildlife sanctuary) did I realize just how small these birds are. Granted, this was a male kestrel, and male raptors are usually smaller than the females, so this was a particularly tiny example. But seeing the trim little falcon perched on my glove made me realize that the bird is only as big as a medium-sized songbird. All About Birds notes that a kestrel is  “roughly the size and shape of a Mourning Dove, although it has a larger head”. Many people who feed birds have gotten a good up-close look at a Mourning Dove pecking at seeds on the ground. The kestrel manages to use a similar-sized frame as a nimble predator.

Here’s why the lesson of the kestrel’s small stature is important to me: if I see a falcon in silhouette on a telephone wire, I would be very hesitant to say something like, “It looks pretty big, but not as big as a Peregrine Falcon, so I think it’s a Merlin, a medium-sized falcon.” If the bird is alone in an empty sky with nothing for comparison, who’s to say my mind isn’t fooling me? It’s better to stick around and see if you can use color patches on the bird — the adult Merlin’s bluish back, for instance, or the American Kestrel’s two dark facial stripes — if it moves to a spot with better lighting. Those color clues can be much more reliable than size.

That’s not to say that size is never helpful for species ID. You just have to use size comparisons. A group of migrating shorebirds in a mudflat often includes both Greater and Lesser Yellowlegs. The size contrast between these two species pops out much more clearly if you notice two standing next to each other. But it also helps to look for other traits for more confidence in your ID, including the slightly upturned bill of the Greater Yellowlegs and the more active foraging behavior of that species compared to the Lesser Yellowlegs.

Some birds are very similar in color and shape, and the only minor difference in appearance is size, such as the American Crow and the Fish Crow. But leave your ruler at home, because precisely measuring a crow’s wing and leg lengths is something that only bird banders holding the birds in their hands can safely accomplish. In this case, thankfully, the voices of the two birds are quite different: the American Crow’s throaty “caw” vs. the Fish Crow’s froggy, higher-pitched “caw.”

But sound is another interesting facet of the size issue, because a number of messages about mystery birds have mentioned that the bird sounded big. So many things can factor into our perception of noise that it’s tough to know what to do with that information. I’ve often been startled by rustling leaves, thinking there was a deer at hand, and realized it was a single squirrel. What’s more, some of our smallest birds have powerful voices — take the House Wren, for example. Looking at this wren, I marvel at how such a volume of whistled song could come out of a throat so tiny.

Then there are the songbirds that make a point of sounding tougher than they are, such as European Starlings and Blue Jays that mimic Red-tailed Hawk calls, hoping to scare off other birds from a good feeding spot. And the cacophony of noise that can come out of an American Crow’s mouth includes noises that might seem to originate from a vulture or other big raptor, yet crows are much smaller than that.

All of which is to say: bird identification means combining several clues at once to make a confident decision (or, equally important, deciding that you don’t have enough clues to decide.) Perhaps the best illustration of this is a Rock Pigeon, back-lit against a bright sky, with its swept-back wings spread wide. Seeing the profile of this relatively big bird, even experienced birders might think for a moment that it’s a Peregrine Falcon, a bird well-known for eating pigeons, rather than a pigeon itself. But soon, other clues reveal themselves: the presence of other pigeons, cooing noises, the overall pigeon-ness of a pigeon, like the traits of a well-known friend, eventually appear if you keep watching.