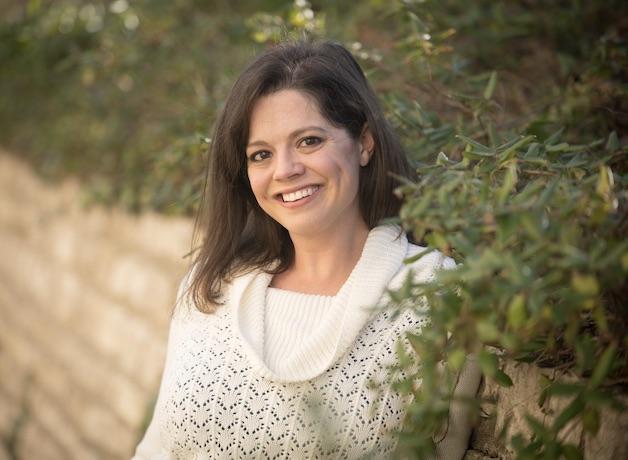 A native of Minnesota, Traci Brimhall is an Associate Professor and Director of Creative Writing at Kansas State University. Her first published collection, Rookery, features many poems about birds.

“Birds just seem to have a kind of spiritual or symbolic weight,” Traci explains. “They feel somehow ancient or ethereal – timeless in a way, and I think poets are often attracted to things that have that sort of feeling.”

But her interest in birds began with a common bird, the Red-winged Blackbird. “Perhaps that's part of the greatness of common things,” she says. “They’re so accessible, so ever-present.”

Brimhall's other books include Saudade and Come the Slumberless to the Land of Nod.

Below, you can read along with the poems featured in the episode:

Aubade with a Broken Neck

The first night you don't come home
summer rains shake the clematis.
I buried the dead moth I found in our bed,
scratch up a rutabaga and eat it rough
with dirt. The dog finds me and presents
between his gentle teeth a twitching
nightjar. In her panic, she sings
in his mouth. He gives me her pain
like a gift, and I take it. I hear
the cries of her young, greedy with need,
expecting her return, but I don't let her go
until I get into the house. I read
the auspices—the way she flutters against
the wallpaper’s moldy roses means
all can be lost. How she skims the ceiling
means a storm approaches. You should see
her in the beginnings of her fear, rushing
at the starless window, her body a dart,
her body the arrow of longing, aimed,
as all desperate things are, to crash
not into the object of desire,
but into the darkness behind it.

My sister asks what ate the bird’s eyes
as she cradles the dead chickadee she found
on the porch. Ants, I say, knowing the soft, ocular

cells are the easiest way into the red feast of heart,
liver, kidney. I tell her that when they ate the bird
they saw the blue bowled sky, the patchwork

of soybean fields and sunflowers, a bear loping
across a gravel road. Already, they are bringing
back to their tunnels the slow chapters of spring—

a slough drying to become a meadow and the bruised
smell of sex inside flowers. They start to itch
for a mate’s black feathered throat and music.

As she cushions the eggs, their queen dreams
of young chickadees stretching their necks and crying
for their mother to protect them until they learn to see.

Sister, it is like this—the visions began to waver,
and the colony goes mad, fearful they'll never see
another dahlia tell its purple rumor, or see a river commit

itself to the ocean. As the last memory leaves them,
they twitch in their sleep, trying to make out the distant
boatman lifting his lantern, his face disfigured by light.

I scare away rabbits stripping the strawberries
in the garden, ripened ovaries reddening
their mouths. You take down the hanging basket
and show it to our son—a nest, secret as a heart,
throbbing between flowers. Look, but don't touch,
you instruct our son who was already begun
to reach for the black globes of a new bird’s eyes
wanting to touch the world. To know it.
Disappointed you say: Common house finch,
as if even banal miracles aren't still pink
and blind and heaving with life. When the cat
your ex-wife gave you died, I was grateful.
I 'd never seen a man grieve like that
for an animal. I held you like a victory,
embarrassed and relieved that this was how
you loved. To the bone of you. To the meat.
And we want the stricken pleasure of intimacy,
so we risk it. We do. Every day we take down
the basket and prove it to our son. Just look
at its rawness, its tenderness, It's almost flying.